Author: Lord of the blood cells How do “Evergreen” trees survive such long winters? 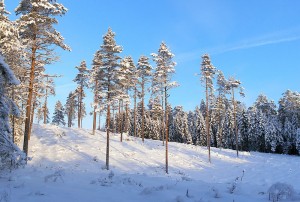 First let’s start with how trees work, and why normal leaves of the typical tree (deciduous) would not survive during the winter. These trees grow large leaves whose great surface area allows for more photosynthesis to occur. However, water is required for photosynthesis to occur. A good amount of water is transported through the tree’s vascular system by xylem and phloem. Much of this water is required to keep leaves alive. If these leaves were to remain alive during the winter months, the water inside them would freeze and kill them anyways. To retain this water, the tree recalls all water back into the wooden parts of the tree and lets leaves “fall” right before the winter. This is known as the dormant state where the tree survives off of the energy created from photosynthesis performed before losing its leaves. Since the leaves had a large surface area, photosynthesis is done in enough quantity to allow the tree to survive with no photosynthesis for a long winter.

Now, onto why the ‘leaves’ of Evergreen trees stay green and are able to survive such bitter cold winters:
Have you noticed what grows on Evergreen trees? The most common “leaf” is the pine needle. These are very small and thin needles that can be thought of as a leaf tightly coiled together. They cover themselves in a waxy substance called cutin. These needles also require less water to stay alive and perform photosynthesis than leaf. The small amount of water and protective Cutin coating stop any water from freezing and killing any pine needles. Yes, the tiny leaves do not perform as much photosynthesis as a large deciduous leaf, but these pine needles have the qualities necessary to survive the long winter and continue to do photosynthesis throughout the entire winter and provide continuous energy for the tree. Also, some needles do die, and these are immediately replaced by new, healthy needles. This process is different than the one time “fall” of a deciduous tree’s leaves. We will see many more pine trees in cold northern climates and more deciduous trees in warm southern climates. One can think of an Evergreen as a tree that has a continuous energy fueling its growth, while a deciduous tree flourishes with high energy production for three seasons of the year and then “sleeps” for the winter with its stored energy.

If you’re looking to take good care of evergreen trees, it would be best to water any backyard evergreen trees in the season of Autumn to add to its water supply that fuels photosynthesis that goes on (important because of the lack of absorbed water in winter due to it being frozen in the soil).

Which tree do you think is more effective at surviving in its own environment?

Is Exercise really that important? 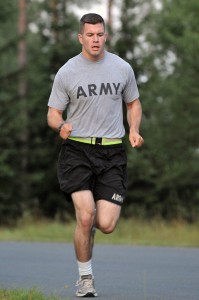 Yes, exercise can have a ton of benefits not only for your heart, but for your overall health. First of all, cardiovascular disease (CVD-or heart disease) accounted for approximately 30% of worldwide deaths in 2008. Coronary heart disease and stroke are the leading causes of death. Why such terrible statistics? Well, let’s just say some people don’t take care of their bodies as well as they should be.

Obesity rates are sky high in people, mostly in the United States. It can drastically increase the risk of certain diseases like heart disease and diabetes (type II). Sometimes obesity and heart disease is beyond peoples’ control, either being born with a very slow metabolism or diabetes. However in most cases, heart illness can be prevented. The best way to fend off heart disease would be to exercise. In combination with a healthy diet, exercise is essential to a healthy heart. The essential benefactors of exercise are that it lowers ones blood pressure and lowers ones resting heartbeat. Your heart isn’t working so hard to pump at higher pressures, but it is being conditioned as the muscle it is to pump faster at certain points. Since you are exerting energy, you burn calories and lower your cholesterol levels (cholesterol levels in bulk could lead to clogged arteries). Of course there’s still more to exercise. Exercise leads to the release of natural endorphins, which create a sense of euphoria. Some people describe this state as a “natural high”. The release of endorphins could be considered positive reinforcement to exercise since it makes people literally feel good physically and mentally. In turn people would keep coming back to exercise to feel great and be in shape. This is overall highly effective for helping people to burn more calories (which would mean burning fat and stopping obesity from occurring within themselves). If one does not participate in exercise, they are much more likely to feel worse and overall have a higher risk of heart disease. According to the CDC, over 9 million cases of cardiovascular disease were due to lack of exercise. So why not exercise? Protect your health and well being. Even for a little bit every day, exercising is a helpful tool for better health and better morale.

Do you exercise on a regular basis?