There is a certain fungus that turns ants into zombies, but afterward, they explode. When ants are just walking by minding their own business they step on fungal spores. It attaches to the ant’s body and the fungal cell goes inside of the ant. The fungus feeds from within and increasingly multiples cells and it is called, Ophiocordyceps,   mainly living in the tropics. The danger about this fungus is that the ant is unaware of this whole process, it goes about its daily life, searching for food and bringing back to its nest. However, the fungus takes up half of an ant’s body mass. It undergoes a parasitic relationship where the fungus benefits, while the ant is harmed.

Once the fungus is done feeding, the ant will feel a needle-like sensation. What is happening here is that the fungus is pushing on the ant’s muscle cells. And the cell signals also get sent to the ant’s brain, then the ant will climb upwards above its nest. Ophiocordyceps does something very weird where it allows the ants to move upwards to a leaf above ground and then the ant bites down, where it locks its jaw. Then it sends out “sticky threads that glue the corpse to the leaf.” The ant’s head then bursts open, called a “fruiting body”, where it looks like horns projecting from the ant’s heads and the horns disperse more of these fungal spores onto its nest below it leaving behind a trail of spores.

“The ants are walking over a minefield,” said David Hughes, an expert on Ophiocordyceps at Pennsylvania State University. 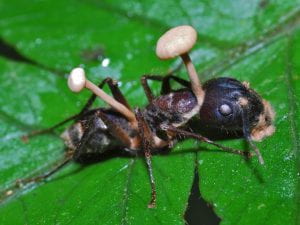 Hornlike antlers that come out of the ant’s head

There is still so much that is unknown about Ophiocordyceps because scientists don’t even know what kind of chemical gets into the ant’s brain causing it to climb. There are ants that age back to 48 million years old gripped onto leaves.  Scientists thought there was one species that zombified ants but it turns out there are at least 28 different fungal species that attack other insects as well. Dr. Araújo drew out a family tree to see what was infected by Ophiocordyceps. It became known that all Ophiocordyceps species come from a common ancestor, first infecting beetles larvae, not hemipteran.

The beetles that are affected by the larvae live in eroding logs.

It can now be inferred that possibly millions of years ago when this was happening to beetles, ants picked up the fungus if they were living in the same logs. Thus a constant cycle and more spreading of fungal spores. Even though natural selection favored keeping the ant’s host healthy and away from parasites, Ophiocordyceps had to find a way to make the ant leave the nest, not far enough from its environment, but just in the right place to send out the spore to infect whatever other ants were living around it.

Because this behavior is so unordinary it is not possible that only one gene is responsible for all of this. They keep finding new species. Dr. Hughes and Dr. Araújo are still researching to find that there are hundreds of other species of Ophiocordyceps that are yet to be discovered. 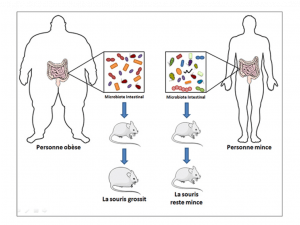 How did butterflies evolve to eat poison?!

A recent article confirms that scientists have researched that caterpillars are now eating milkweed (which is supposed to kill them). How is this happening? “Scientists have unraveled the sequence of gene mutations that enabled the monarch butterfly to thrive on toxic milkweed.” We learn at a young age that caterpillars turn into beautiful butterflies, so something must be happening before metamorphosis. There are three gene changing mutation amino acid sites including, 111, 119, and 122. Mutation 122 had the biggest boost in resistance. Another article states that ‘monarch flies’ continue to have small amounts of cardiac glycosides through metamorphosis, which is a trait that has been developed in monarch butterflies to restrain predators. 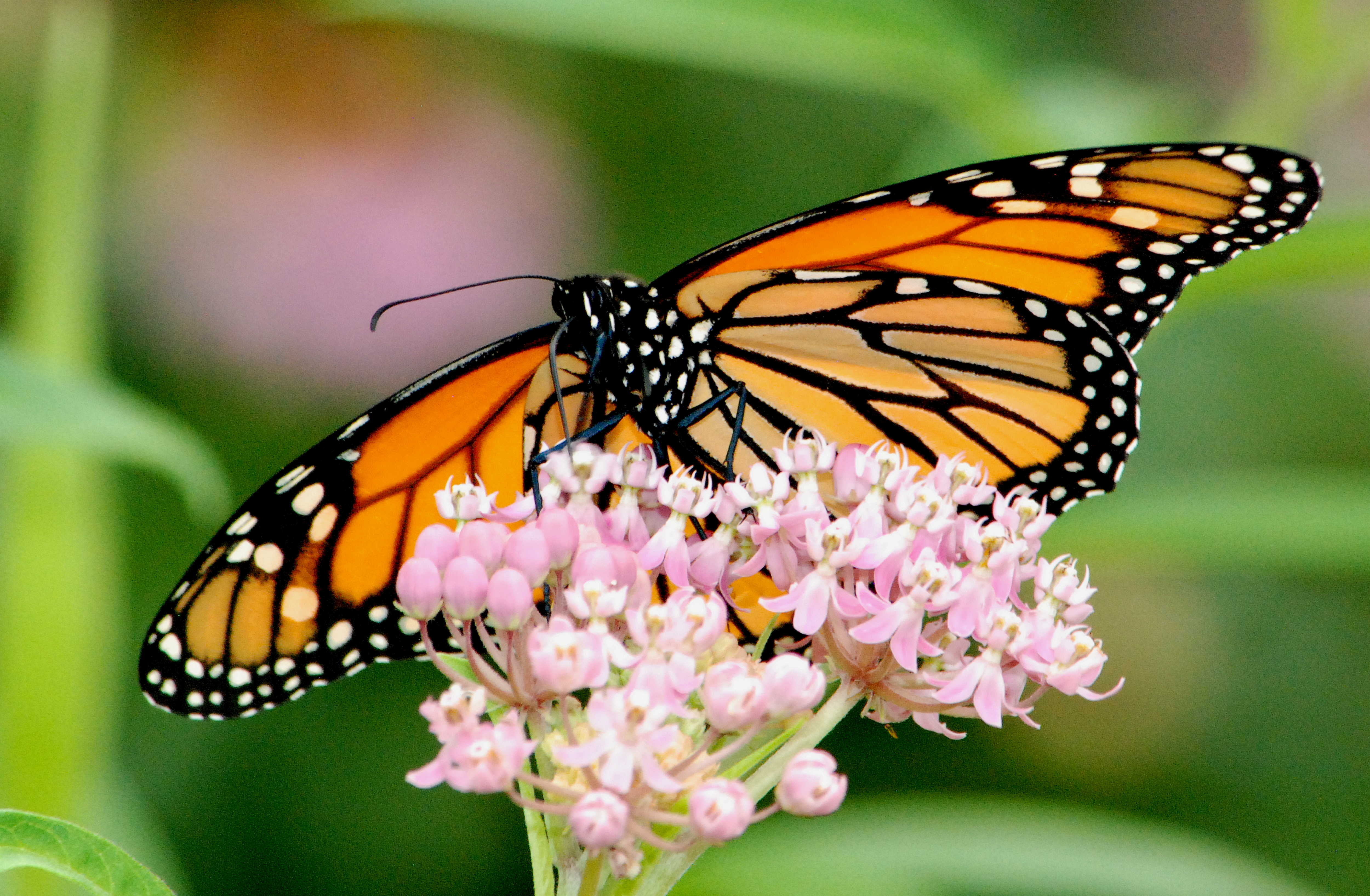 Monarch butterflies can eat milkweed due to a peculiarity in a crucial protein in their bodies, which is a sodium pump, that the cardenolide(steroid) toxins intervene with. How the pumps work? They move positively charged sodium atoms out of the cell resulting in the inside of the cell is negatively charged. In order for a heart to beat, the sodium pump has to build up enough electric charge and then nerves use the pumps to send signals to the brain.

What does milkweed have to do with this? In the study, they first addressed how milkweed is toxic to almost all insects, but caterpillars depend on milkweed. Females use milkweed to lay eggs and caterpillars eat as much as they can before chrysalis. In the article, they are referred to as “flying poison” because the milkweed toxin gets send from their gut to their wings and anything that tries to eat it immediately vomits it up.  After these mutations, they now NEED milkweed to live and it altered the sodium pumps, so cardiac glycosides in the monarchs cells don’t affect them.

This mutation allowed butterflies to have their own food supply since milkweed is poisonous to other insects. Noah Whiteman, a biologist at the University of California, Berkely used CRISPR to try the mutations on fruit flies. The fruit fly experiment resulted in the findings that mutation 122 has bad side effects and is only useful if followed by another mutation. Other researchers say the order that mutations are done can make a big difference as well.