The beautiful Heliconius butterflies from Central and South Africa are known for their colorful wing patterns. Some of their wing patterns mimic that of other species to protect them from their predators. There is one species of these evolutionary marvels, Heliconius cydno, that scientists have found that the activation of a single gene can determine whether the butterfly expresses white or yellow spots. To come to this conclusion scientists created a genetic map of H.cydno with both white and yellow coloring.

Through examining the genetic maps, the researchers found that the gene al1 was switched on in the white colored butterflies which would mean that al1 gene was correlated to the production of yellow pigmentation. To test this the researchers used CRISPR (a gene editing tool) to switch off the al1 gene in what was supposed to be white spotted butterfly embryo. They found that by switching off that gene the butterflies developed with yellow spots.

The researchers that carried out this experiment also looked into the evolutionary history of these butterflies since this experiment didn’t add pigmentation to the butterflies but changed an ancestrally present pigment by switching off a gene through CRISPR. They studied the al1 gene to butterflies that are closely related to the Heliconius species and found that white version of the spots is a recent development and that H.cyndo was first species to develop the white spots.

After further examination, there was evidence that the white version of the spots corresponds to matting patterns. So, the white spotted H.cydno males preferred to mate with the white spotted H.cyndo females and vise versa with the yellow spotted H.cydno males to H.cydno females. Which begs the question of what roles does the activation of al1 play in not only the coloration of these butterflies but also evolutionarily going forward? If gene activation through CRISPR continues how will that also affect the future mating patterns of these butterflies but possible of other species too?

Could Messenger RNA Be the Future Chronic Disease Treatment?

What is mRNA and what makes it a good treatment option?

Messenger RNA (mRNA) sends signals to the cells to make certain proteins by changing the genetic coding. So mRNA has the potential to treat a variety of diseases because it can induce cells to make therapeutic proteins. This essentially makes the patient’s body cells into a treatment factory which would give patients a less invasive treatment option.

One of the obstacles with this treatment is how to deliver mRNA to the diseased area safely and efficiently. Researchers at MIT have found a new way to provide patients with mRNA. They made an inhalable form of mRNA. The goal would be to administer the mRNA similar to an asthma inhaler where powered mRNA medication would be sprayed into the lungs but as of now, the medication is only available in nebulizer form. However, there needed to be a way to stabilize the mRNA molecules using an aerosol method. So the researchers experimented with positively charged beta-amino esters which are biodegradable and are more easily broken down by the body. The upside to using a biodegradable material is that there would be a minimal accumulation of the substance in the area it was administered. Accumulation would cause unwanted side effects to the patients’ health.

To test out their new product MIT scientists put the mRNA molecule and polymers in spheres.  Then suspended those spheres in water droplets and distributed a mist through a nebulizer to mice. But the mRNA molecules that they put into the spheres coded for the production of the bioluminescent protein luciferase. Using the code for the bioluminescent luciferase, the researchers would be able to see if the mRNA had effectively made the protein that it coded for if it glowed.

After 24 hours since administering the medication, the mice were producing bioluminescent proteins in their lungs which hints that eventually scientists could inject the code for therapeutic proteins in the mRNA and the cells would respond.  But as the mRNA levels dropped so did the protein production. That showed that only with repeated doses of the medication the mice would be able to continuously produce their own proteins. They also found that mRNA was evenly distributed throughout the five lobes of the lungs so the mRNA reached all the areas of the lungs which would be helpful in treating cystic fibrosis. This process could be the future treatments for chronic lung diseases as researchers work to make this product into inhaler form instead of the nebulizer for convenience purposes.

Is Gut Bacteria the Future of Cancer Treatment?

Scientists believe that the differences in the gut microbiota are the reason certain cancer patients don’t respond to the new cancer treatments. The new cancer treatment that scientist studied, in relation to the gut microbiota, is immunotherapy, particularly checkpoint inhibition. Immunotherapy aims to rapidly shrink or disappear advanced tumors. While doing this study, Scientists found that certain bacteria, “good” bacteria in the gut, are linked to a patient responding well to the treatment and “bad” bacteria is linked to the unresponsiveness of the immunotherapy.

So what makes a bacteria good or bad ? In this study, the “good” bacteria helps immune cells recognize tumor cells. The “bad“ bacteria interfere with the immune cells functions.

Can a Fox Be Your New Pet? 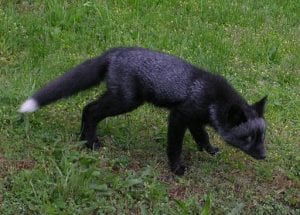 The big difference between your dog and a wild animal is the relationship that it has with humans. For example, both dogs and foxes come from the canidae family, however foxes are generally scared of humans  while dogs are “ a man’s best friend”. So why is the fox’s response drastically different than a dogs?

Scientists may have figured it out. The study was originally started in Russia where a scientist wanted to see if he could domesticate foxes like people had domesticated dogs. He started to breed silver foxes with domestic traits: ones that were more tamed and friendlier towards humans.  But at the same time he also bred foxes that were aggressive to humans in order to make an aggressive breed of foxes. He then started to compare the two breeds as the generations went on. He studied only 10 generations but 50 generations of silver foxes later Cornell did a study on the same foxes.

Cornell studied the tamed foxes’ brains in comparison to the fox’s brain that were aggressive towards humans.  The scientist obtained brain tissue samples from 12 tamed foxes and 12 aggressive foxes looking for differences between the two brains. The particular part of the brain they studied was the prefrontal cortex and basal forebrain which are known for processing more complex information. The prefrontal cortex processes social behavior and personality expression, while the basal forebrain is a critical component to processing memories. The neurotransmitters from those regions were what the researchers mostly focused on. In particular, they focused specifically on the neurotransmitters that release dopamine and serotonin in the foxes brains  which are responsible for feelings of happiness because they trigger the pleasure center of the brain.

Through the study of the neurotransmitters, the researchers found that genes from these sections of the brain from the tamed foxes were altered through the breeding of the foxes but not the ones that they expected.  The variant genes in fact coded for alterations in the  function of the serotonergic neurons and the glutaminergic neurons. Those neurons coincide with learning and memory. This shows that tamed animals learn and memorize differently than their aggressive equals.  Now that we know this do you scientists through genetic modifications will be able to tame or domesticate any animal by simply changing a gene in their brain?