Will Microscopic Worms Replace Dogs in Sniffing Out Cancer?

It is very rare that doctors are able to find cancer at its early stages, however, on the rare occasion that they do there is a much higher chance that the patients survive. You may be asking yourself: Why isn’t there a way to find this cancer earlier inorder to save more lives? A recent study shows that microscopic worms are able to sniff out cancer as early as stage 1. While dogs are also able to smell cancer from human breath, urine, and blood, keeping cancer sniffing dogs in a lab is not practical. These tiny worms create a more practical solution to this problem.

Specifically, lung cancer is found by doing a biopsy or different kinds of imaging tests. However, these kinds of tests are not able to detect lung cancer until it is in its later stages and more severe. As we learned in AP Biology, cancer is caused by cells that uncontrollably divide. In normally dividing cells there are checkpoints the cell must pass in order to divide. These checkpoints are at the G1, S, and G2 phases. If the cell needs to divide there will be an influx of cyclin concentration and MPF activity. Cyclins are proteins that control the progression of the cell through its checkpoints by activating cyclin-dependent kinases. MPF, or maturation promoting factors, promotes the cell’s entrance into the M phase from the G2 phase. In cancer cells there is a genetic mutation, sometimes it is hereditary, however it can also be caused by caused by tobacco smoking, radiation, etc. This genetic mutation causes these proteins to not work properly. Because of the malfunction of these proteins, cells do not know when to stop dividing and continue to divide.

A team of scientists from Myongji University in Korea found a type of worm called C. elegans that is attracted to the floral scent of lung cancer cells. 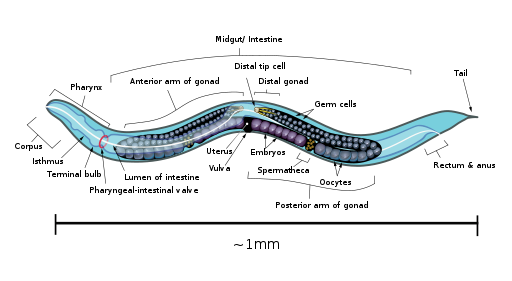 Harnessing the Power of Photosynthesis for Environmental Gain