Scientists at Yale University have identified a way to “supercharge” tumor-attacking T Cells, a finding that may not only improve the effectiveness of a promising type of cell-based cancer immunotherapy, but also expand the number of cancers it can treat. Most people are familiar with cancer treatments such as surgery, radiation, and chemotherapy. But, a newer option called immunotherapy, is getting well-deserved recognition across the cancer community. These drugs teach the immune system how to recognize and kill cancer cells, equipping it to hone in on diseased cells while leaving healthy cells alone. 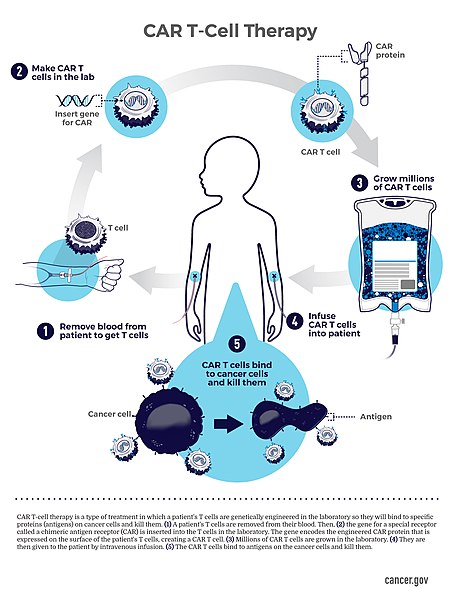 First, blood is drawn from the patient and sent to a lab. At the lab, the T cells are separated from the blood and ‘supercharged’ with a gene that generates chimeric antigen receptors (CAR), which allow the T cells to bind to cancer cells and destroy them. Hundreds of millions of these T cells are synthesized in the laboratory to create a personalized, well-armed immune defense. Finally, the patient’s newly modified T cells are returned to the clinic and reinfused into the patient, seeking and destroying cancer cells in the patient’s bloodstream. The discovery can advance CAR-T cell therapy, which harnesses the immune response of T cells to cancers by introducing tumor-detecting molecules into the cells. In the last decade, the U.S. Food and Drug Administration has approved six CAR-T cell therapies to treat B cell lymphomas and multiple myeloma. But despite early successes, the effectiveness of the treatment tends to diminish over time, which has launched a search for ways to boost function of T cells.

Researchers have devised an ingenious way to efficiently scan the genome of CD8 T cells for specific genes that might enhance the cells’ ability to attack cancer cells. They developed a new kind of genome-wide gain of function screen to find a molecular enzyme that acts like a foot on a gas pedal to increase metabolic activity in T cells.