A huge stride in ensuring the efficacy of CRISPR genome-editing has been made by researchers at the University of Texas at Austin. The CRISPR gene editing tool is a new genetic engineering technique that can, by using an enzyme called Cas9, correct problematic genomes in a person’s DNA. It finds the genome that its programmed to and cuts it out of the DNA, leaving the organism without that DNA, and inhibiting the organism from spreading that gene to their offspring. There have been studies have shown CRISPR has been effective in editing genomes that may cause disease. In a study where the Cas9 enzyme was injected into the bloodstream of six people with a rare and fatal condition called transthyretin amyloidosis, those who received the higher dose saw a decline around 87% in production of the misshapen protein that causes this condition.

For many diseases, Gene therapy is the “Holy Grail”. For treatment of Sickle-Cell Anemia, CRISPR has been thought of as a definitive cure. In 2017, it was reported that a 13-year-old boy with HbSS disease had been cured with gene therapy. This treatment also allows the carrier of this gene to reproduce without any risk of their offspring being affected by SCD. 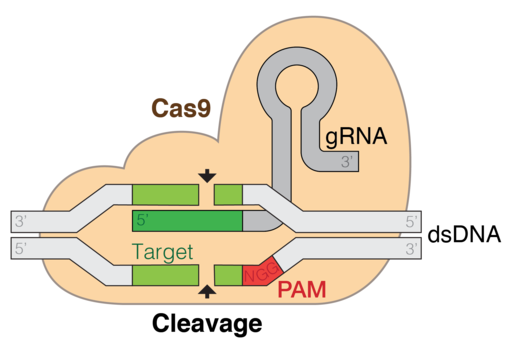 However, there are concerns that when performing the genome editing, the wrong segment of DNA could be targeted by scientists and removed, resulting in potentially drastic consequences. Another concern is that editing out certain genes is societally damaging, as it is considered unnatural to be able to edit the genomes of human bei

ngs. Another major safety concern is mosaicism (when some cells carry the edit but others do not); this could result in many different side effects. Due to the many uncertain aspects around the danger of genome-editing, there has been delay in passing legislation approving genome-editing.

In a study published on March 2nd 2022 at the University of Texas at Austin, researchers have found a previously unknown structure in the Cas9 protein that is thought to attribute to these genetic mistakes. When using cryo-electron microscopy to observe the Cas9 protein at work, the researching team noticed a strange finger-like structure that stabilized the off-target gene section to be edited instead of editing the target gene.

The researchers at the University of Texas at Austin were able to tweak the protein, preventing Cas9 from editing the wrong sequence. This change has made the tool 4,000 times less likely to produce unintentional mutations; the team calls the new protein ‘SuperFi-Cas9’.

While other researchers have made similar edits to make the Cas9 protein more accurate in its editing, these often result in slowing down the genome editing process. At UT Austin, the researchers say that SuperFi-Cas9 still is able to make edits at the normal speed.

The researchers plan to test SuperFi-Cas9 further in living cells as opposed to the testing thats been done with DNA in test tubes. Hopefully they’re able to cement the accuracy of SuperFi-Cas9, and that this may accelerate us on our way to implementing CRISPR gene editing in the current medical world. Let us know in the comments below what your thoughts are on CRISPR editing, and if you think we should continue researching it!