The Promise of Messenger RNA Therapy

The author Drew Weissman, a vaccine research professor at the University of Pennsylvania, and his colleague Katalin Karikó created mRNA molecules back in 2005 that would not cause harm when injected into animal tissue. Then in 2017, Weissman and Norbert Pardi found that this mRNA creation could be brought into human cells through a fatlike nanoparticle without harm, and that bringing this modified mRNA in protect mRNA from being broken down by the body and resulted in the immune system generating antibodies and more effectively neutralize the invading virus. 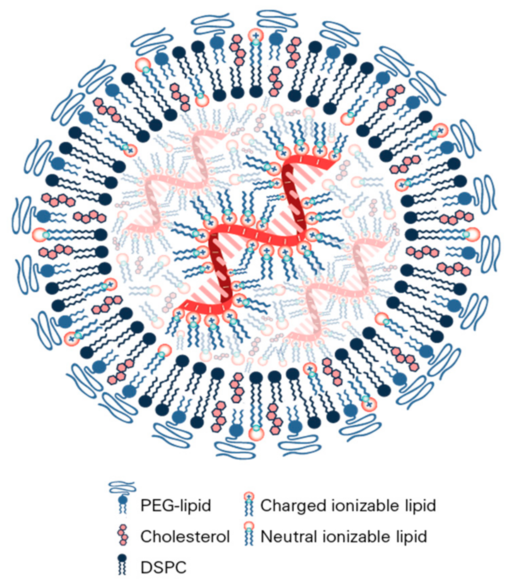 This mRNA fatlike nanoparticle is known as mRNA-LNP (pictured to the left). mRNA is able to enter cells without harm because it is carried in by this liquid nanoparticle which is known for its role in transportation. The Pfizer-BioNTech and Moderna COVID-19 vaccines use this mRNA-LNP, and in clinical trials have shown to successfully prevent over 90% of treated people from contracting COVID-19.

The positive results from many trials and studies of the Pfizer-BioNTech and Moderna COVID-19 vaccines have provided a lot of information on the success of mRNA-LNP. It has been found that mRNA-LNP is much more effective and quicker than other approaches to COVID-19 treatments such as growing vaccines in laboratory cell cultures.

Messenger RNA therapy works by making cells create proteins that induce a reaction from the immune system in response to invading viruses (pictured to the right). This reaction in response to invading viruses is called the humoral response, where cytotoxic T cells are made to release proteins that destroy infected cells. The humoral response also trains the immune system to respond to and attack that virus in the future by creating memory B cells to recognize it, which is called a secondary immune response.  This method of instructing cells to create these proteins yields a greater quantity at a time that conventional protein and monoclonal antibody therapies.

The success of messenger RNA therapy in COVID-19 vaccines has inspired the further research and use of this method for other viruses, as well as cancers, food, allergies, and autoimmune diseases, and many clinical trials are underway. Messenger RNA therapy could be a much more time and cost efficient alternative for a lot of conditions and treatments. More research still needs to be done, and there are many improvements that could be made (such as smaller doses of or a better supply chain for the vaccine), but overall messenger RNA therapy is very promising for treatments of the future.