Spiros Linardopoulos, leader of the research focuses on identifying gene targets for which new anticancer drugs can be developed, as well as patient categories that would benefit from treatment. “We urgently need to find new options to stop more women dying,” says Linardopoulos. Triple-negative breast cancer is characterized by the absence of estrogen receptors, progesterone receptors, and an excess of the HER2 protein. HER2 protein promotes the growth of cancer cells. Triple-negative breast cancer accounts for 10-20% of all breast cancers. There is a great deal of interest among doctors and researchers in discovering new medications that can treat this type of breast cancer. A new generation of therapies is being developed to prevent this. 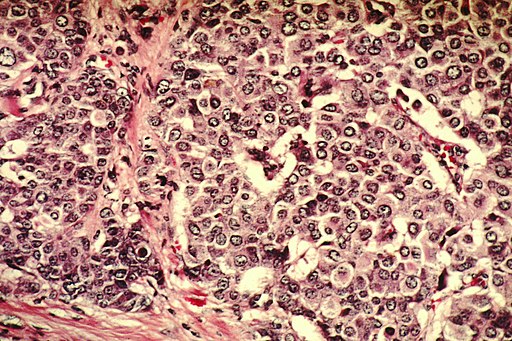 Breast cancer cells that have grown out the passageways and into the surrounding tissue displacing normal cells.

BOS172722, for example, has been shown in animal studies to improve the efficiency of paclitaxel, the main chemotherapy used to treat triple-negative breast cancer. Paclitaxel works on cell division but can be insufficient because some cancer cells can escape and become resistant to the drug, leaving the problem unaddressed. What makes BOS172722 much more efficient than the main chemotherapy treatment? BOS172722 is intended to force cells to divide rapidly, resulting in cell death. According to research, Cancer cells grown and treated with BOS172722 were observed to divide in 11 minutes versus 52 minutes without the drug, an immense improvement. “If it proves effective, this could be expanded to include lung and ovarian cancers,” says Linardopoulos. BOS172722 is a new treatment that uses cancer’s rapid growth against it by forcing cells through cell division, destroying tumors, and extending patients’ lives.

Breast cancer is caused by the uncontrollable growth of breast cells. Cancer develops as a result of mutations, or abnormal changes, in the genes that regulate cell growth to keep them healthy. They change their metabolism to support their expansion and spread throughout the body. If a cell has a mutated suppressor gene, then the cell can turn into cancer. Cancer cells have been shown to undergo characteristic changes in their metabolic programs, such as increased glucose rates, implying that metabolic shifts support cell growth and survival.

What Is Biotin? Can It Prevent Hair Loss?