Eating is one of the most simple tasks humans need to preform to maintain survival, and our bodies have numerous complex mechanisms to gather the nutrients from the diverse foods we eat. Eating starches for glucose to fuel our cells or vegetables to acquire the necessary vitamins and minerals to ensure a smoothly functioning body; eating provides us with the essential nutrients to survive. But what about the building blocks of life, our cells? So far in our biology class, we’ve learned that cells possess the capability to engulf food particles and microorganisms through a process known as phagocytosis, a subcategory of endocytosis. 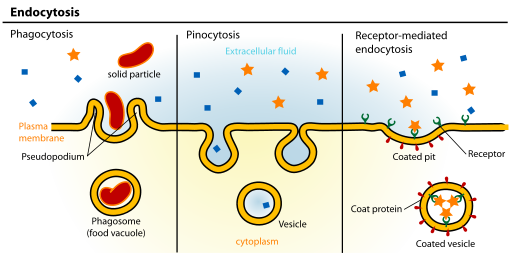 This process involves our cell’s plasma membrane, a highly complex cellular component that can undergo shape transformations. For a cell to perform phagocytosis, the cell membrane must alter its shape to create vesicles, tiny structures within a cell that consist of fluids and food particles enclosed by a lipid bilayer, which transfer food particles and microorganisms into the intracellular matrix.

On the surface, phagocytosis seems like a relatively not intriguing and straightforward process, yet there is much more to uncover. Scientists at the Ohio State University state that “the question of how those pockets formed from membranes that were previously believed to be flat had stymied researchers for nearly 40 years,” which opens up an entirely new idea to be pursued (Ohio State University). To tackle this preliminary issue, the scientists experimented with highly powerful cameras to take a deeper view into the cell membrane’s ability to carry out phagocytosis. Using super-resolution fluorescence imaging, they watched the cell membrane form pockets within itself in live time. Now, the question of how these pockets form is answerable.

According to the scientists, their studies revealed that ‘protein scaffolds’ deform the cellular membrane once designated to the site of vesicle formation. This discovery contrasts with the previous hypothesis, which states that protein scaffolds had to undergo an energy-required reorganization to create membrane curvature. Lead scientist Kural states that “Understanding the origin and dynamics of membrane-bound vesicles is important — they can be utilized for delivering drugs for medicinal purposes but, at the same time, hijacked by pathogens such as viruses to enter and infect cells”(Ohio State University).  Hopefully, with a better understanding of the shape transformation undergone by the cellular membrane, along with the fundamentals of life, we will be able to produce more effective therapeutic strategies.

Will Shark Antibodies Help Create an End to the COVID-19 Pandemic?

2021: The Year Of The Coronavirus Variants