“US braces for Omicron!”…Whats all the hubbub really about?

I was studying for AP Bio one day, when I first heard about the fears around the omicron variant. All over instagram, facebook, I even received emails about it: there seems to be major concern among many, including prominent medical researchers, according to WHO.

“What is the omicron variant?” You may ask.  This variant was first reported from South Africa  Wednesday, November 24th. In the recent weeks, cases of infection have been increasing rapidly in South Africa, likely as a result of this mutated variant. According to WHO, this variant has a large number of concerning mutations (discussed in detail below), some of which increase the risk of infection. Luckily, current SARS-CoV-2 PCR tests still can be used as a marker in detecting this new omicron variant. Because of this fact, officials have been able to detect this variant faster than previous surges in infection cases. 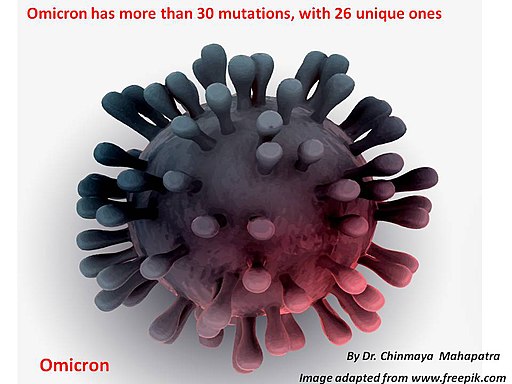 Despite being able to detect this variant faster than previously, researchers are still concerned over the mutations this variant poses and the implications that could have in this pandemic. Being the fastest spreading variant yet, some of these concerns include the specific mutations on the spike proteins. As we learned before, Spike Proteins protrude from the SARS-CoV-2 cell, allowing for it to bind to receptors on the host cell. Penny Moore, a virologist at the University of the Witwatersrand in Johannesburg, South Africa, says there are more than 30 mutations to the spike protein in omicron, which could possibly make it more contagious and/or allow this variant to evade our vaccines.

Many of the mutations detected on the omicron variant have been found in the delta and Alpha variants, and are linked to heightened infections, as well as the ability to evade infection-blocking antibodies and other immune responses. Mutations to regions of the spike protein in the omicron variant has changed the way the antibodies recognize the pathogens, hindering their ability to bind to the spike proteins. If the spike proteins have mutated and changed shape, then the antibodies will not be as effective in binding. Additionally, hints from computer modeling have revealed the omicron variant could dodge the immunity given by the T cells. However, Scientists have yet to understand the true significance of these mutations and what it means for the response to the pandemic. Penny Moore and her team hope to have their first results in two weeks.

What does this mean for vaccine efficacy?

Well, two quarantined travelers in Hong Kong have tested positive for the omicron variant despite being vaccinated using the Pfizer vaccine. Additionally, Moore says that breakthrough infections have been reported in South Africa among people who have received the vaccine. Again, researchers in South Africa will soon find whether this omicron variant causes illness that is more severe or milder than that produced by the other variants. We should hear their results soon. According to Researchers, the greater threat that this omicron variant poses beyond South Africa is unclear. In the meantime, a way to fight for a healthy future would be to continually take the measures necessary to reduce the risk of COVID-19, including proven public health measures such as wearing masks, hand hygiene, social distancing, and getting vaccinated.

Let me know your thoughts below on this new variant! Stay Safe!

How does the Omicron variant of COVID-19 compare to the deadly Delta variant?