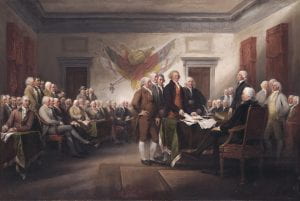 This portrait represents the signing of the Declaration of Independence. As you can see in the picture, only White men are present which represents the racial and gender inequality that existed then and still exists now to some extent.

This statement written almost 300 years ago is what the United States of America bases most of its legitimacy on. Note the words “all” and “equal” within this statement. However, despite being one of America’s most precious documents, does it speak the truth? Are all men and women living in America created equal? We live in a time where institutional racism has become one of the most driving issues. Within the healthcare and education systems, among other things, racial disparities mostly among the Black communities has persisted. In this article, Michigan Medicine researchers explored ten different studies in which racial disparities between Black and White Americans were present. In studying these cases, one can view institutional racism in a different and very serious light that might bring more attention to the ongoing issues within 21st century America.

Though Black Americans are at higher risk for Covid-19 due to increase risk of hypertension, diabetes and obesity, Melissa Creary of U-M School of Public Health believes that “it’s not the fact that they have these diseases that’s causing the higher death rate because people of all races, classes and creed have these diseases.” She later states that there is a great burden of disease present in the Black population. She also believes that this is because of “structural inequity” not for other reasons like increase in chances of developing other medical diseases.

This study found that societal factors and the accessibility to quality care contributes to “a 2.5 times higher prostate cancer mortality rates for Black men compared to non-Hispanic White men.” It was found that Black men get fewer PSA screenings and are more likely to be diagnosed with later stage cancer. They will also be less likely to have health insurance, low accessibility to high-quality care and other issues linked to socioeconomics. After looking more into the study through this article, it was found that Black men did not have an increased risk of dying from prostate cancer compared to White men with a similar stage of disease. The greatest disparity to Black men with prostate cancer is low accessibility to healthcare and any type of care when it comes to health issues.

Ryan Huetro who works as a family medicine physician at Michigan Medicine found that Black and Indigenous people can improve their health care by seeing doctors of their race or ethnicity. A physician may not even realize the bias they might be treating a patient with but these biases still remain. Though matching people based on races may be beneficial to one’s healthcare, it is sometimes hard to match races in one’s own community. Therefore, this is not the best solution in fixing racial disparities within the healthcare system.

In this study, it was found that nearly half of all “Black, Hispanic and Indigenous women had discontinuous insurance coverage between pre-conception and after delivering their babies compared to approximately a fourth of White women.” Lindsay Admon of Michigan Medicine found that racial and ethnic disparities were prevalent within the access to preconception, prenatal and postpartum care.

In this study it was found that there were racial disparities in treatments for young colon cancer patients. Elena Stoffel of the Cancer Genetics Clinic at the U-M Cancer Center found that these tumors found in young people and African Americans need to be looked at and compared to see if they have “molecular differences compared to the typical colorectal cancer seen in older adults.” We can look more into this topic by looking at the way cancer occurs within our cells. Cancer is caused by the changes in the DNA in our cells. We can also look our genes. Oncogenes help cells grow, divide and stay alive. Tumor suppressor genes help cell division and cause cells to die at certain times. Colon cancer can be caused by DNA mutations that switch on and off oncogenes and tumor suppressor genes. This causes the cells to grow at rapid paces. By learning more about our genes and cell division, we can learn more about the molecular differences when diving into colorectal cancer.

6. Dying costs for People of Color

The U-M team found that the last six months of life is $7,100 more expensive to the Medicare system for Black people and $6,100 more expensive for Hispanics compared to White people. This is one of the many racial disparities that are present within our corrupt healthcare system.

Michigan Medicine researchers have targeted blood pressure in order to reduce racial disparities in dementia development. They found that long term hypertension is a possible explanation for why Black people are more likely to develop dementia than White people.

This study focused on the fact that Medicare does not cover low vision devices. So when looking at White adults age 65 and older, the odds of using a low vision device were 17% lower in Black adults. Joshua Ehrlich found that low vision services improve the quality of life and equitable access to these services is a major challenge.

The Affordable Care Act is a reform law enacted in March 2010 and can also be known as “Obamacare.” It had three main goals which was to make health insurance more affordable and more available, expand Medicaid, and support innovative medical care delivery methods to lower costs of health care. However, though it has achieved aspects of those goals, Black and Hispanic Americans are still less likely than White Americans to have health coverage and will ultimately avoid care because of high costs.

10. Lack of Stable Food Supply that can Impact the Health Conditions

Prior to Covid-19, many adults still struggle with food insecurity and after Covid-19, things have gotten exponentially  worse. Access to nutritious foods while also maintaining good health has been a struggle more than ever. Especially during these daring times, it is crucial to ensure that certain individuals are getting food that align with their pre-existing health conditions so those conditions don’t further themselves.

Ultimately, we as Americans need to do better in working to achieve equality for all but specifically health equality for all. Everyone deserves to have the same treatment and the same fighting chance to survive the deadly diseases. Health equality is one of the most basic but challenging things that America needs to figure out fast so that more lives are not put at risk. We can do better. Any comments on this topic would be much appreciated. Thank you!