In his article “Environmental Racism Has Left Black Communities Especially Vulnerable to COVID-19” published by The Century Foundation, Caesar Berkovitz speaks of research surrounding environmental racism, air pollution, and their impacts on vulnerable populations concerning COVID-19. After outlining the pre-existing inequalities that harm Black individuals during the pandemic (increased risk of exposure due to work hours, disparities in wealth-income, and racism within the healthcare system), he goes into the meaning of residential and environmental racism. Environmental Injustice regards inequality in poor or communities of color that increases exposure to pollution and health risks. Environmental injustice is often paired with minimal environmental protection and environmental quality through government regulations. One aspect of environmental injustice regards the disparity in the location of pollution and bad air quality. Due to the pre-existing residential segregation, often Black individuals are placed in communities that have lower property value, and therefore a lower price on the industrial market. With more industrial factories, highways, shopping malls, and businesses in Black communities, air pollution worsens, decreasing the physical health of those who live there, hence a form of environmental injustice is created. Wealth disparities have allowed white community members to buy property away from these areas such as rivers used for dumping trash, and areas with landfills. Many individuals in these environmentally challenged neighborhoods also do not have a large legislative presence- often financial power comes with political power.

Air pollution has also been found to have links to lung cancer. For example, China is a country with a high lung cancer rate. Despite the low smoking prevalence, the large exposure individuals have to air pollution has created around 260,000 lung cancer cases in Chinese women annually. When cells are damaged, altered, or there are changes in their DNA (which can be caused by air pollution), they can become a defective part of the body system. These damaged cells then divide through mitosis without receiving the proper signals at the mitosis checkpoints. Once they do so, they continue to divide and they can create clumps of cells called a tumor. Once cancer cells metastasize, they spread through the blood vessels and they can move through the body to spread cancer to other parts.

So, you may ask, “how does this all apply to COVID-19?”. Well, when pollution from fossil fuel and industrial emissions are released into the atmosphere, PM 2.5 (or carcinogen) is released with it. The tiny particles of Carcinogen have been proven in a study by Harvard University to increase health risks when someone gets the COVID-19 virus. After looking at more than 3,000 countries all over the world, researchers in this study found that individuals who lived over a decade in a county or place with high levels of PM 2.5 (in comparison to the rest of the world) are 8% more likely to die from COVID-19. Therefore, adding another layer to environmental injustice, with increased pollution from environmental racism comes a higher fatality rate for individuals living in these areas from COVID-19.

“Wait, but I thought the environment was getting better because pollution and emissions were decreasing during the pandemic?”. This statement is true, but it doesn’t overpower the pre-existing exposure of pollution present within populations that experience environmental racism. A study done by CREA (Center for Research on Clean Energy and Clean Air), found that due to the lack of oil and coal production and demand, 11,000 air pollution-related deaths have been avoided in Europe, and there has been a 40% reduction in average level of nitrogen dioxide (NO2) pollution. However, as CREA also found, the net presence of PM2.5 and NO2 in the atmosphere is increasing- Tangshan, south Hebei, and Shanxi, China for example exceeded their pollution levels from last year. 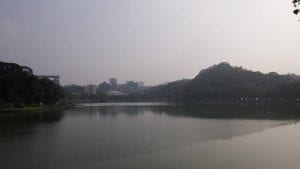 Photo with “no filter” taken by someone in Taipei, Taiwan where the PM 2.5 level was 152.

Solving environmental racism includes untangling a web of pre-existing inequitable environmental, social justice, and healthcare legislation- there is no one clear solution. Caesar Berkovitz suggests that both pre-existing improvements and new changes can be made. He argues increasing funding of the Housing Choice Voucher Program at the federal level and increasing rental assistance programs would help reduce residential injustice. In addition to that, one of the main problems many towns face concerning building affordable housing is the “zoning town boards’ ‘ which approve or disapprove the development. Improving the structure of zoning town boards to ensure that at all times, both sides of the community are voiced in the discussion would be a step towards reducing residential inequalities. Redlining and inefficient zoning boards within towns should be the main focus, as it is the root of the unfortunate placement of the individuals harmed by environmental injustice. Increasing federal transportation funds to create the equitable street design and increasing funding for public transformation to reduce fossil fuel emissions from cars as Berkovitz mentions is also another option. Since environmental injustice covers a wide range of legislation and areas, there are various platforms and ways in which humans can help fight it. As we reach what seems like the end of the pandemic, what do you think would be the best solution to fighting environmental injustice? Comment down below!