Is This a Possible Explanation for COVID-19’s Rapid Transmission?

In a study done by Rommie Amaro and colleagues at the University of California San Diego, Maynooth University (Ireland), and the University of Texas at Austin, it has been discovered that certain Glycans, or a sugar molecule chain bound to the SARS-CoV-2 spike proteins, could be a real reason that SARS-CoV-2 can easily enter our bodies. 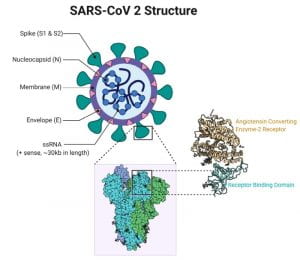 The SARS-CoV-2 structure, featuring more detailed and realistic images of the spike proteins.

In order for a human– or a host cell– to be infected with COVID-19, the actual virus (SARS-CoV-2) must infiltrate the host cells. As SARS-CoV-2 is covered in spike proteins, these proteins dock up with a host cell receptor called ACE2, which is embedded in the cellular membrane. In order for the virus to successfully dock with the receptor, it must change its shape in order to expose the Receptor Binding Domain (RBD), or exactly where the spike protein docks with ACE2.

At the specific spike protein/ACE2 docking points, the spike proteins are covered in Glycans, or sugar molecules. These glycans have the ability to protect the virus from the host cell’s immune system. Relating the importance of the glycans and the immune system to our class, we have heavily researched the roles of sugars in molecular processes and pathways and the functions of the immune system. With this knowledge, we are able to see, recognize, and understand how powerful and prevalent the glycan is in guarding the virus against our usually strong, organized immune system attacks. As the scientists in the study processed the information about the glycans, they were intrigued to discover how it could possibly lead to easier rates of infection.

To begin, they used dynamic computer models to simulate the glycan-covered spike proteins docked to the ACE2 in the cell membrane. They were able to deduct that the glycans help optimize the spike protein’s effort to expose its RBD. Thus, the glycans actively allowed easier infection through an easier docking experience. However, they also uncovered that the glycans only bound to certain spike proteins, meaning that the immune system, but specifically antibodies, could attack the virus at these docking points. Posing as an extremely positive discovery, the absence of glycans in certain docking points inspired the team to see if they could get rid of the glycans in total. Through Biolayer Interferometry, or technology that allows you to record biomolecular interactions, they were able to successfully mutate the spike protein so it didn’t have glycans anymore– thus, reducing SARS-CoV-2’s ability to bind to ACE2.

The concept of removing the glycans from the spike proteins has been a major point of research in vaccine production. Although vaccines being made by Pfizer and Moderna are revolved around MRNA, ideas like debilitating the virus-protecting glycans are extremely revolutionary and could lead to possible amazing breakthroughs in the future.

Protecting Ourselves Against COVID-19

ARE WE DOOMED? Maybe not