So we beat SARS and MERS… Why haven’t we beat COVID-19?

SARS, MERS, and COVID-19 are all part of the coronavirus family. “Coronaviruses are a large family of enveloped RNA viruses” that can be found in a variety of bat and bird species. While this makes the three viruses similar, they all have specific differences causing unique results in terms of outbreaks and how the specific viruses have spread. What is so powerful or different about the coronavirus causing COVID?

First of all, let’s talk about how viruses hijack our bodies. Viruses are microscopic parasites, much smaller than bacteria, that contain key elements that make up all living things such as nucleic acids and DNA or RNA, but are unable to replicate and access this information encoded in their nucleic acids, meaning they cannot self replicate. In order to reproduce, they rely on the genetic material of host cells (our own cells). As we talked about in class, viruses are able to bind to our cell surface receptors and trick our cells to “let them in”. The viruses are then able to hijack our cells by releasing their genomes, or that information they couldn’t previously access, resulting in our cell making millions of copies of that genome to spread throughout the body in order to infect other cells and / or other human hosts. This is how all three of the coronaviruses hijacked our bodies and communities. Let’s hear what happened once this step occured.

SARS stands for Severe Acute Respiratory Syndrome. The SARS outbreak began in the Guangdong province in China in 2002. The coronavirus that caused SARS, called SARS-CoV, was likely spread to humans, in the China wet markets, from civets or other animals who acquired the virus from horseshoe bats. The World Health Organization (WHO) issued a global alert after identifying an atypical pneumonia spreading amongst hospital staff and later names the virus SARS based on the symptoms people began to express. The epidemic was controlled on July 5th 2003 and only four cases have been reported since, 3 of which being in a lab setting dealing with the specific coronavirus. The reason why SARS was able to be contained so quickly was due to the fact that one could only spread the virus if he/she had symptoms and if one expressed symptoms it was easy to self isolate, therefore not spreading the virus to others. In addition, SARS has a fatality rate of 9.6% meaning a good number of people who contracted SARS were likely to pass on and therefore not pass on the virus to others.

MERS stands for Middle Eastern Respiratory Syndrome. As we learned in class, viruses are no longer named by their place of origin, but this was not the case in 2012 during the outbreak of MERS. Similar to SARS, MERS is a zoonotic virus, meaning MERS was passed from an animal, in this case a camel who contracted the virus from bat once again, to humans in Saudi Arabia. Although 27 countries have reported cases of MERS since 2012, transmission among people is rare and MERS has a fatality rate of 34.3%, making it even more deadly than SARS and therefore making it even harder to spread.

The first case of COVID-19 or SARS-CoV-2 was reported in Wuhan China in December 2019. By the end of January 2020 the WHO had declared a public health emergency of international concern and by the beginning of February the WHO had declared a pandemic. So what makes the coronavirus disease so much worse than the other ones? How did COVID-19 spread so quickly and to the entire globe? And why are our daily lives changed forever or at least until we can get a handle on the virus? 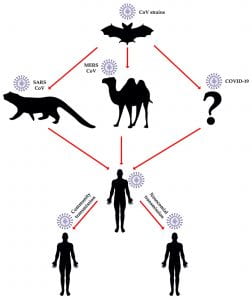 Origin of the three coronaviruses

First of all, the COVID-19 causing coronavirus SARS-CoV-2 is very similar to SARS-CoV, but with very unique and important differences. What we have all learned about SARS-CoV-2 is that you don’t need to be experiencing symptoms to transmit the virus. This is very different from SARS-CoV where you needed to have symptoms in order to transmit the virus. Also, while the transmission rates are lower for MERS and SARS because the fatality rates are higher, in the case of COVID-19, the fatality rate is approximately 1-3%, meaning more people are surviving COVID-19 making it easier for this virus to survive and pass on to other people that it has yet to infect. In addition, as we talked about in class, we have evidence that “viruses can naturally mutate to mimic host biology so as to ensure successful viral propagation” and as a result “a host of high frequency mutations have resulted in a least 5 differentiated SARS-CoV-2 strains to date” making it even harder to develop a successful vaccine to target and eliminate the coronavirus disease.

So, will we ever be able to put a stop to the spread of the coronavirus disease and therefore the pandemic? The answer is yes, but we first need to figure out how to stop the spread of the virus. The truth about COVID-19 is that unfortunately, as stated above, it is much easier to transmit than SARS and MERS, and COVID-19 has been able to get on planes and travel the world unlike the previous coronaviruses. While it is easier to transmit it is also more survivable than the other coronaviruses that have impacted our communities thus far.

How Reliable Are Covid-19 Tests and What Are The Different Types of Tests?