Your absolute favorite AP Biology blogger, Bacterina, is releasing a 3 part Special Edition feature about the Poliovirus. Prepare to be amazed and intrigued about the deadly disease of Polio and the incredibly effective Polio vaccine.

Both an article on the historical significance of Polio and another on the Polio vaccines allow us to see the background of Polio.Poliomyelitis or Polio as it is commonly known has existed in the world for 6000 years. Researchers know this from the discovery of Egyptian mummies with withered limbs. The disease is a life-threatening disease caused by the poliovirus. More recently Polio was an epidemic in the 20th century in the US and over the world occurring mainly in the 1940s and 1950s. But in the 1950s a vaccine was created and the rates started to decrease. Since May of 1988, the World Health Assembly strives to eradicate poliomyelitis and because of this, the cases of Polio have decreased by 99%. Now the World Health Organization has declared the regions of the Americas, Western Pacific, and Europe as polio-free. On the other hand, South-East Asia is not free of polio but is working to eradicate the disease. The most well-known case of Polio was when President Franklin Delano Roosevelt was paralyzed by Polio and remained in a wheelchair for most of his adult life. The President was only in his late 30s when he got polio. Most people who are paralyzed by Polio were confined to wheelchairs or iron lungs for the rest of their adult lives. 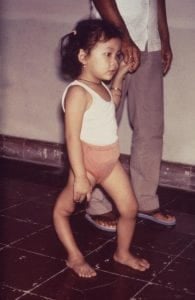 A Child Infected with Paralytic Polio

A very informative article written by the CDC informs us of the symptoms of Polio, how it is transmitted, and how to prevent the disease. The articles share the information which is explained below.

Initially, individuals infected with Polio experience flu-like symptoms where they have a sore throat, fever, nausea, fatigue, headache. These symptoms last for 2 to 5 days and eventually go away. A smaller amount of people infected with polio will have more serious symptoms like paraesthesia, Meningitis, or Paralysis commonly in the legs, arms, or both (.5 percent of people will experience this). Of those who have paralysis, 2/100 will die from the paralysis because the virus will paralyze key muscles that allow ourselves to breathe. Only people who have paralytic disease polio are considered to have poliomyelitis.

Poliovirus is a very contagious disease and lives in an infected person’s throat and intestines. It is spread through person to person contact by either fecal matter or from droplets of a sneeze or cough (less common). A person can be infected with polio if they have feces on their hands or on other objects that eventually enter their mouths. After someone is infected they can spread the virus to other people from immediately to two weeks. The virus can infect others if it contaminates food and water that is later ingested.

There are two vaccines that act as preventative measures against this disease. The inactivated poliovirus vaccine (IPV) is given by an injection into a patient’s arm or leg depending on their age. In the United States, this vaccine has been used widely since 2000. The other type of vaccine is an Oral poliovirus vaccine which is used all over the world. Many children who get the vaccine are protected from the disease with a success rate of 99 percent. There is currently no cure for poliovirus but there are ways to speed up recoveries like bed rest, pain medications, and a ventilator.