Extreme weather events, such as Hurricane Dorian, have recently become more frequent due to climate change. Changing weather patterns can effect species, but it is unknown what these effects will look like. To solve this problem, Assistant professor of Biology at Washington University in St. Louis Carlos Botero and Thomas Haaland, formerly a graduate student at the Norwegian University of Science and Technology, develop models to predict the effects of changing climate on biological species. 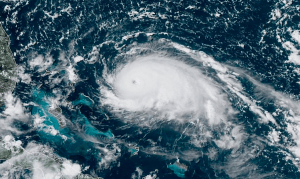 Botero and Haaland used computer simulations to highlight certain factors and traits that put a species at risk for extinction. A key finding was that species that breed a single time in their lifetime evolve as if they were going to experience environmental extreme often while species that breed multiple times in their lifetime evolve as if environmental extremes never happen. The two categories of species are called “conservative” and “care-free” by Botero and Haaland. The former can adapt to frequent, less intense extremes, while the latter can adapt to infrequent, more intense extremes. Because of the rising intensity of natural disasters as a result of climate change, the “care-free” category of animals is less prone to extinction and the “conservative” category of animals is more prone to extinction. Thus, their findings challenge the widely-accepted idea that species with more exposure to environment changes will more easily adapt to climate change.

For example, species in areas with more frequent heat waves are more prone to extinction. Specifically, species that are in these areas with a small geographic distribution are more in danger. This logic can be applied to any kind of environmental extreme, including hurricanes, floods, and wildfires, say Botero and Haaland.

Botero and Haaland also discovered that species with traits that cause them to evolve quicker tend to worsen adaptation to events such as natural disasters. This is partly because of the high mutation rates that accompany faster evolution rates.

Understanding how climate change effects animal species and knowing which species are in the most danger helps aid conservation efforts. People and the governments are able to start by helping protect species that are at the highest level of risk.