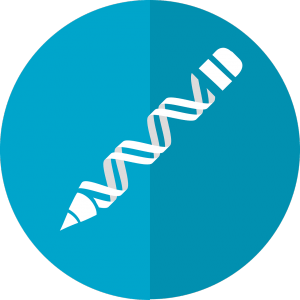 CRISPR’s ‘precise’ gene-editing has actually been damaging other parts of the DNA sequence, according to a recent study. Photo from this source.

Of the various gene-editing techniques, CRISPR-Cas9 is the fastest, simplest, and most accurate gene-altering method known to date. Comprised of simply two parts, CRISPR-Cas9 snips through targeted segments of DNA and causes a change in the genetic code. Scientists are hopeful that we can soon use this method to cut out mutations that code for HIV, cancer, and sickle cell disease. However, a study published in Nature Biotechnology has revealed an unwanted side-effect of CRISPR.

When using CRISPR-Cas9, there are two major molecules that create a mutation, or change, in a DNA segment. The first is an enzyme called Cas9. This enzyme works like a pair of scissors and that cuts the two helices at a specific location so DNA can be altered. The second tool used in this process is the guide RNA (gRNA) that binds to the DNA and ensures that the Cas9 molecule cuts the DNA in the correct place. Finally, after the incision, the DNA will seal itself back together, without a trace of the deleted segment.

Such a precise process seems flawless. In theory, one should be able to cut out the unwanted genetic material and our DNA should perfectly repair itself. Unfortunately, senior group leader and director of the study at Wellcome Sanger Institute in England, Allan Bradley, stated that “CRISPR is not as safe as we thought.” Through a systematic and tedious approach, Bradley and his colleagues edited a series of mouse and human cells with CRISPR and then examined DNA base pairs father and farther away from the cut site. By examining millions of base pairs, the team landed upon unsettling news.

Bradley and his team found that huge chunks of DNA were inadvertently deleted, mutated, and rearranged millions of base pairs away from the cut site. The DNA was mutated so immensely that cells lost function in 15% of cases. Because these CRISPR-induced mutations were shown so far away from the cut site, this information could have easily been overlooked in other studies.

This research poses questions on the accuracy of such gene-editing methods. What are the long-term effects of genetic engineering with CRISPR? How can we ensure that base pairs so far away from the cut site aren’t altered? Although this is somewhat discouraging news for the CRISPR community, this newfound information is motivating more researchers to improve CRISPR technology before making it widely accessible.