Groundcherries are small orange fruits that are in the same plant family as tomatoes. However, they taste nothing like tomatoes. Instead, some taste like pineapples while others have a hint of vanilla. These yummy, mysterious fruits are uncommon because farmers have not grown them in sizable numbers. This is because the berries tend to drop off the branch and onto the ground before they are ripe which makes the plant unreliable for farmers to harvest. 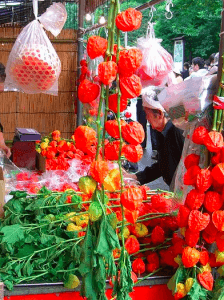 These types of crops were known as “orphans” because they have some appealing traits but also come with challenges which is why farmers don’t plant them in large numbers.

However, researchers Lippman and Van Eck wanted to develop a groundcherry that eliminated those challenges by domesticating the crop using a tool called CRISPR. CRISPR allowed scientists to make changes to the plant’s genome, developing new varieties more efficiently than ever before. The researchers wanted to make the groundcherry a more manageable plant and they were able to do that by making small modifications to its genome.

By doing this, they made the groundcherry plant more compact and therefore more manageable for growers. Now, culinary experts even recommend using groundcherries in cakes, pies, spicy salsas and savory appetizers. So Lippman and Van Eck really did help the groundcherry to become the next specialty crop!