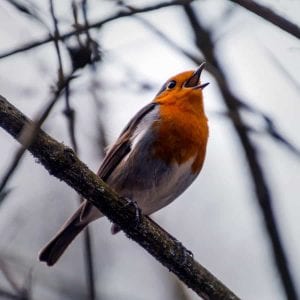 Picture this: you are laying back on a sunny day in your hammock, reading the world’s finest AP Biology Textbook, when you hear  the iconic tune of a songbird found in nature, not Songbird by Kenny G.  – a picture perfect setting, nonetheless. Honestly, did you know that the tune of the songbird is alluding to animal behavioral patterns of sensorimotor skills? I would hope so! Birds, similarly to humans, gain a plethora of knowledge through experience. For example, as a child mimics a parent in a specific sensorimotor skill, the child eventually becomes more and more capable of performing the task. Similarly as in songbirds; baby songbirds mimic the tune or call of their parents, eventually developing their cognitive sensorimotor skills to perform it themselves; alluding to an organism’s capabilities to perform a “trial-and-error” process to sensorimotor learning. This led to Emory University studying the sensorimotor learning capabilities of birds in relation to their ability to command a suite of knowledge, through the relationship of auditory feedback and sensorimotor development in songbirds, and its correlation to humans.

Sensorimotor skills is the process of receiving sensory message in the form of a input, for example, a message from the brain, and producing a response, for example, your brain sending sensory messages to the sensory receptors dispersed throughout your body, such as those in your arm and fingers, providing it with a “message” to contract and extend as you read this post!

In order for Emory University to test this hypothesis, miniature headphones were custom-fitted to adult birds and used to provide auditory feedback. The songbirds would hear a specific pitch and mimic the tone, manipulating the sound specifically through a range. Multiple experiments allowed the researchers to record and measure the relationship between the size of a vocal error the bird perceives, and the probability of the brain making a correction of a specific size. This lead Ilya Nemenman to say that, “our findings suggest that an animal knows that even the perfect neural command is not going to result in the right outcome every time”. The birds were attempting to correct their pitch in a broad range of tones, depicting their sensorimotor abilities to quickly decipher a range of variabilities, even though the birds initially had a tone that didn’t match that of the headphones. Nemenman used an example of learning to swing a tennis racquet, leading her to say  “You’re only rarely going to hit the ball in the racket’s exact sweet spot,” she says. “And every day when you pick up the racket to play your swing is going to be a little bit different, because your body is different, the racket and the ball are different, and the environmental conditions are different. So your body needs to remember a whole range of commands, in order to adapt to these different situations and get the ball to go where you want”.

Let me start by saying that my  sister is a Speech Language Pathologist. As a younger brother, I say that I also have a masters degree in Speech Language Pathology as I “took” many of the courses with her. While “studying” with her, I have always been fascinated in the cognitive abilities of the brain to gauge sensorimotor skills quickly, efficiently and productively. The study done by Emory University is quite fascinating to me, as organisms tend to run a “trial-and-error” basis in order to eventually to achieve the goal, but also to gain the “experience” expanding the broader range knowledge. Most interestingly, our sensorimotor skills sometimes will not do something incorrectly, but “tweaks” itself in order to achieve the associated correct “pitch”. Lastly, keep singing for science!