Unlike the other four human tastes, our process of detecting sourness has always been a mystery, and scientists were definitely not expecting to find the answer in a  protein normally found in the inner ear. 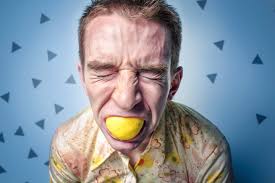 This protein, coded by the gene scientists refer to as Otop1, usually functions as part of the vestibular system to maintain balance. Given this more commonly known function of the protein, scientists were shocked to find its use for both balance and detecting the acids often associated with sour taste. The association is actually not as far- fetched as one might think. Otop1 codes for the synthesis of calcium carbonate crystals which rest on the hairs of the inner ear and detect gravity to help humans stand upright. Researchers found that the tongue also uses these crystals to detect sour taste. Calcium carbonate, a relatively basic compound, dissolves when it comes into contact with acid, which reaction can be detected by the brain and interpreted as sour taste.

How could such a protein find its way to use in both our senses of balance and taste?

The answer lies in evolution. If a certain protein proves advantageous over generations, organisms with it in surplus may evolutionarily find other uses for the it. Recently scientists have actually found several proteins for sensory organs that double as homeostatic sensors in other tissues. Otop1 is only one of many; smell receptors are found in the kidney in surplus, as are sweet taste receptors in the bladder.

Although we have unearthed a lot about the human body over the years, there is always so much more to learn!