A researcher from Florida Atlantic University has documented that two genetically distinct species of guenon monkeys in Gombe National Park in Tanzania, Africa, have been successfully mating and producing hybrid offspring for hundreds or thousands of years! How did she learn this? From their poop!

Earlier Knowledge: Previous studies showed that guenon monkeys’ widely varying physical traits keep them from interbreeding because of mate choice. In other words, a male monkey won’t be attracted  to/mate with a female unless her face matches his. Therefore, blue monkeys and red-tailed monkeys (two different species) wouldn’t be expected to mate. The two species currently live in close proximity to each other in narrow riverine forests along Lake Tanganyika in Gombe National Park, and Kate Detwiler has been studying them for years. 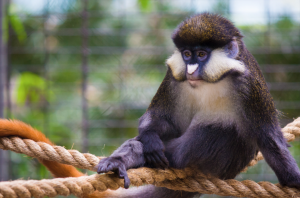 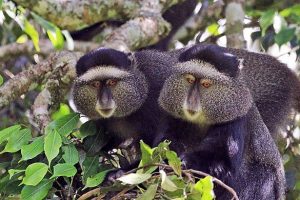 The Breakthrough: Kate Detwiler, author and an assistant professor in the Department of Anthropology in FAU’s Dorothy F. Schmidt College of Arts and Letters, challenges this claim that red-tailed and blue monkeys don’t mate. She studies the extent and pattern of gene flow from “red tailed” (Cercopithecus ascanius) monkeys to “blue” monkeys (Cercopithecus mitis) due to hybridization. Detwiler observes and studies the two monkey species in Gombe National Park, and recognizes hybrids by combined markings of the two parent species. She estimates 15% of the population are hybrids!

The Evidence: Detwiler uses mitochondrion DNA extracted from the monkey species to show movement of genetic material from one guenon species to another. More specifically, she examined fecal samples and found that all of the monkeys (hybrids, blues, and red-tails) have red-tailed mitochondrial DNA traced back to female red-tailed monkeys. Using mitochondrial DNA was the best option because it is more abundant than nuclear DNA and only comes from the mother. In her study, her control group was a group of blue monkeys outside the park; when she extracted DNA from these monkeys, she found that they only had blue monkey DNA. Upon studying the hybrid monkeys, Detwiler found no consequences of cross breeding.

Detwiler’s Theory: The key finding made from Kate Detwiler’s study is that blue monkeys in Gombe National Park emerged out of the hybrid population. She speculates that red-tailed monkeys got to Gombe Natoinal Park first and thrived. Male blue monkeys had to leave their original homes outside the park and then mated with red-tailed females. How was the hybrid population sustained? Detwiler believes that the monkeys have learned socially that if you grow up in a hybrid group it is okay to mate with any other monkey.

So What? “The Gombe hybrid population is extremely valuable because it can be used as a model system to better understand what hybridization looks like and how genetic material moves between species,” said Detwiler. This is especially important because hybridization often occurs in response to environmental changes, and climate change is happening now! Who knows what hybrids we will see in the future? Check out the full article here to read more about this fascinating study!

The Behavioral Causes of Obesity