You all remember the ALS ice bucket challenge, that took social media by storm, in which people dumped ice water on their heads in order to raise money and awareness to ALS, a neurodegenerative disease that progressively destroys the motor neurons and eventually leads to death. 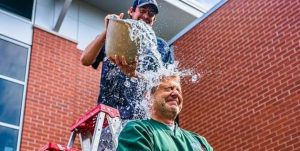 There is currently no cure to this horrible disease. However new genetic technology (CRISPR) may change all that.

In short, CRISPR is a new form of gene editing that allows scientists to change an organism’s DNA.

Scientists discovered that ALS is caused by a mutation in the C9orf72 gene. ALS is often caused by a significant repeat of a segment of DNA that becomes toxic. So, using CRISPR, scientists deducted which genes either protect against or cause these toxic DNA segments. This process was extremely effective and scientists found about 200 genes that affect ALS. For example, scientists found a gene that codes for a protein called Tmx2 that when removed from mice neurons caused the mice to survive whereas not removing them killed them. This means that scientists are beginning to figure out how to cure ALS.

Discoveries such as these are revolutionary as we can now find specific causes for previously fatal, cureless diseases  such as this. In addition, using this technology we can target these specific genes and save lives.

However, whenever we discuss gene editing we must ethically consider when does this become too far? Where is the line between helping to cure people and helping to destroy society by designing babies?

To answer my own question, I think it is crucial that we take any step possible to help find cures in situations such as this. That being said, there are clear limits that must be respected. The line is definitely hazy. Let me know in the comments your thoughts about gene editing!

But for now, let’s enjoy this scientific win and hope that ALS can be officially cured. Good job ice bucket challenge for bringing attention to a serious issue that may now actually be cured.

CRISPR Cas9, too good to be true?