Although CRISPR is known for being a gene-editing tool, it can be used in other areas, such as a defense mechanisms in bacteria. This discovery “Probably doubles the number of immune systems known in bacteria,” according to a microbiologist at the University of California. Bacteria have to defend themselves against Phages, which take control over bacteria’s genetic machinery and force them to produce viral DNA. Bacteria use CRISPR to defend themselves against Phages because it stores a piece of past invaders DNA so bacteria can recognize and fight of those future viruses. 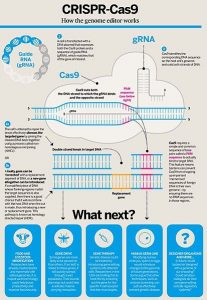 the researchers found that nine groups of bacterial genes were defense systems, and one system protected against plasmids. The data revealed a possible shared origin between bacterial defense systems and defense systems in more complex organisms. Some of the genes contained DNA fragments that are also  important parts of the immune system in plants, mammals, and invertebrates. The discovery of more bacterial defense systems poses the question of wether they will also be useful biotechnology tools like CRISPR is.Only 40% of bacteria have CRISPR, so scientists searched for other bacterial defense mechanisms. To do this, they looked at genetic information from 45,000 microbes, flagging genes with unknown functions located near defense genes, because defense-related genes cluster together in the genome. The researchers then used genomic data to synthesize the DNA and  inserted them into Escherichia coli and Bacillus subtilis, which can both be grown and studied in the lab. They then studied how well bacteria defended themselves during phage attacks with various genes detected. If eliminating certain genes deterred the bacteria’s defense, that determined that those specific genes were a defense system.