Researchers at the Gladstone Institutes made scientific history by turning skin cells of rats into stem cells by activating a certain gene in those cells using CRISPR technology. CRISPR technology is a tool used for editing genomes through making it easy for researchers to modify gene function and easily alter DNA sequences. CRISPR stands for “clusters of regularly interspaced short palindromic repeats” and it has been a popular topic of discussion and research in the science world.

Gladstone senior investigator, Sheng Ding and his team shaped their research aiming to answer the question; “can you reprogram a cell just by unlocking a specific location of the genome?” which they answered yes at the end. They decided to test on specific stem cells that can be turned into any cell type in the body, Pluripotent cells. Ding built upon a different senior investigators discovery, Shinya Yamanaka, who found he could make stem cells out of skin cells by treating skin cells with four key proteins called transcription factors. Here Yamanaka learned that the transcription factors could change which genes are expressed in the cell, turn off genes associated with skin cells, and turn on genes associated with stem cells and he called these skin turned to stem cells Induced Pluripotent Stem Cells (iPSC).

So Sheng Ding was inspired by Yamanaka’s investigation and decided to follow the same process but treat skin cells with CRISPR  instead of transcription factors. They targeted genes Sox2 and Oct4, only expressed in stem cells, which can turn on stem cell genes and turn off those associated with different cell types. With CRISPR, Ding and his team discovered they could reprogram cells activating Sox2 or Oct4. This proved to be more efficient than previous study, as using the CRISPR technology to target a specific location on the genome immediately triggered a natural chain reaction reprogramming the entire cell into an iPSC. 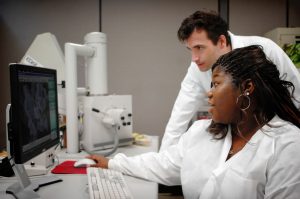 This was surprising and groundbreaking for this research group as they answered their guided question but came out with more. They still want to understand how the CRISPR technology was able to trigger a change within a whole cell efficiently and immediately compared to any other tested process. This study expanded knowledge on CRISPR and its many functions, and creates more questions on why and how it can do what it does. CRISPR technology continues to confuse scientists by manipulating genes in new, different, and unpredictable ways so the next question is, what does it have up its sleeve next???