A 7-year-old boy with a rare genetic skin disease is reported to have made significant progress after eighty percent of his skin has been replaced through gene therapy. The boy, Hassan, was diagnosed a severe genetic disease called Junctional Epidermolysis Bullosa (EB) that destroyed most of his skin. Caused by a mutation in a gene encoding part of the protein Laminin 332, EB causes fragile skin that blisters and tears even with the slightest touch and is prone to infections and skin cancer.

When Hassan contracted a bacterial infection and lost two-thirds of his skin, doctors struggled to find a way to save the boy. Trying antibiotics, bandages, special nutritional, skin transplant from his father, nothing seemed to work, and after two months, doctors were sure they could not save him and thought that “he would die”. 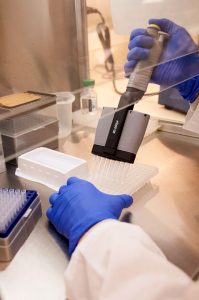 Doctors then reached out to Dr. Michele De Luca, the director of the Center for Regenerative Medicine Stefano Ferrari at the University of Modena and Reggio Emilia in Modena, Italy and who had treated smaller patches of skin on patients with EB. Dr. Michele De Luca and his team experimentally extracted a sample of approximately half a square inch of the boy’s skin, genetically engineered the cells by using a virus to replace the mutated gene with a normal version in the DNA. In the laboratory, the new skin cells were grown into sheets of skin, which was then grafted by surgeons back onto the boy’s body.

By the end of the procedure, the doctors had replaced nine square feet or eighty percent of Hassan’s skin– the greatest surface area covered in a patient with the genetic disorder. As the surgery was a success, Dr. De Luca notes about Hassan, “when he woke up, he realized he had a new skin.”

The success of the project and surgery is “one of these [studies] that can determine where the future of the field is going to go,” states physician Jakub Tolar. This study can also potentially help researchers use stem cells to treat other genetic skin conditions. As researchers continue to search for further advances in the field, Hassan is now happily able to play soccer and run!

Clock Change is Actually Great For Your Brain!