Life developed on Earth because of its rare abundance of water. While we do need water to survive, our water must also be clean and potable, without contaminants or other substances. Recently, the US Geological Survey (USGS) and the US Environmental Protection Agency (EPA) have conducted surveys on our drinking water. The USGS-EPA study has brought to light the disproportionate representation in the media of the toxicity of BPA in drinking water. BPA, or bisphenol A, is used to make epoxy resin and polycarbonate plastic, which is commonly used to make plastic water bottles. BPA in drinking water is commonly covered in the media, even though it was only found in less than 40% of the streams tested in the USGS-EPA study. Contrary to what most people believe, an adult would have to drink over 5,600 gallons of water in one day to reach the safe intake level for BPA set by the EPA. BPA is estrogenic, which means it contains estrone, a toxic estrogen that is naturally produced in the human body. Therefore, concerns of BPA’s toxicity in our drinking water are not nearly as imminent as many people believe. 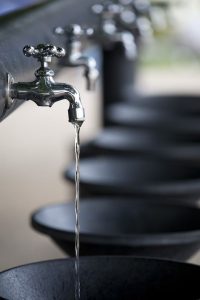 So, what should we be worried about in our water? The USGS-EPA study found that all streams tested contained at least one toxin. The organizations tested 38 streams and searched for 719 substances. Some streams contained only one substance, yet others contained 162. 66-84% of the toxins found in the streams were results of human activity. Though the USGS and EPA found these toxins, the toxicity of these toxins must be taken into account. This new data sheds light on our drinking water, and takes the spotlight off of BPA.