Epigenetics is the study of inheritable changes in gene expression not directly coded in our DNA. Scientists at Tel Aviv University have shown that stress, induced by traumatic events, can be passed on to offspring. The study refers to this stress as passing on “memories.” The study finds the exact way that the inheritance of environmental influences is turned “on” and “off.” RNA sequences that regulate gene expression are partially responsible for deciding when the inheritance is on or off.

Scientists found that C.elegans worms only passed on inheritable epigenetic responses for a few generations (using small RNAs that target green fluorescent protein). This led them to believe that epigenetic responses die out eventually. However, this did not account for the possibility that inheritance could be regulated.  Scientists discovered that in order to create new small RNAs that allow a response to be passed on to multiple generations, they needed RdRP enzymes. These amplify heritable RNAs for generations. Certain genes that they called “MOTEK” (Modified Transgenerational Epigenetic Kinetics) were involved in turning on and off epigenetic transmissions. They switched on and off the small RNAs that the worms use to regulate genes using a feedback interaction between gene-regulating small RNAs and MOTEK. This determines whether an epigenetic memory will be passed on, and for how many generations.

Even though this study was done on worms, these scientists have said that these basics can possibly lead to discovery of inheritance for all organisms. This small bit of research can lead to endless amounts of knowledge for similar mechanisms in humans. 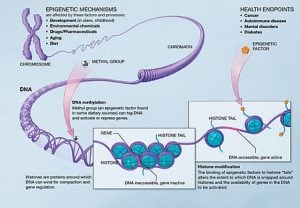