Researchers at the University of Pennsylvania School of Veterinary Medicine, in February 2017, have discovered a trend in T regulatory cells and plasma cells, that explain why these “antibody-producing plasma cells” can last so long. They used a special microscope that shows “movement and interaction” of cells.  They found that regulatory T cells in the bone marrow support plasma cells, which disappear without the T cells.  Plasma cells are involved in the immune system, and can either be vital or detrimental. To learn more about plasma cells click here.  Scientists hope to use this new knowledge of the interaction between regulatory T cells and plasma cells to either increase the amount of plasma cells to fight off a virus, for example, or to decrease the amount in order to stop it from creating a disease.  This research also explains why vaccines can last so long. For example, the chicken pox vaccine is only given twice when the person is very young, but they will be protected against the disease even when they are much older. The regulatory T cells support the plasma cells in the bone marrow which create antibodies that fight off viruses, etc. Another article that explains this discovery can be found here. An article that describes more uses of regulatory T cells in the immune system can be found here.

With this discovery, scientists have more power to control, and have more insight into how plasma cells can be sustained over long periods of time.

Here is an image of an antibody that plasma cells create. 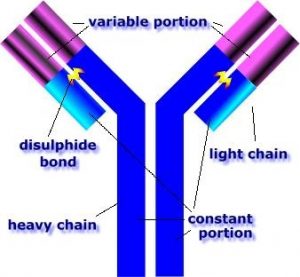