Can your Medications Hurt you More Than Help? 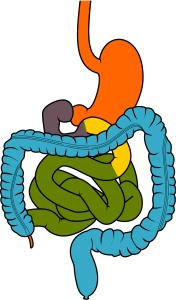 This is an image of the GI tract. This is the location of where the illness affects the body.

Patrick Schloss, a scientist studying the affects of antibiotics, constructed an experiment that tested the susceptibility of mice to Clostridium difficile (C. diff), which is a bacteria that affects humans and animals. Symptoms include diarrhea and severe inflation of the colon. It is known as an in imbalance of the beneficial bacteria in the gut and is very hard to treat. Fecal transplants can be used to treat Clostridium difficile but he thinks that there may be an easier way. This illness is not caused by any one microbe, but it occurs when lots of bacteria are removed from the GI tract usually due to some form of antibiotic, that is taken to treat another issue that the person is having. Wouldn’t it be be easier if there was a way to prevent this illness in the first place? We all get a common cold, most of us are on the road to recovery once our physician  prescribes us an antibiotic to knock out out our infection. We just need to make sure that it doesn’t take out our good bacteria as well.

In Schloss’s experiment, he first gave mice antibiotics and measured the type and amount of bacteria in the GI tracts. They then added a pathogen to the experiment,  that would almost insure that the mice would get C.diff. When they got the results, they found something that might be very helpful to humans in the medical field.

They found that the mice that had the bacteria of specific groups were much less likely to get C.diff.  Porphyromonadaceae, Lachnospiraceae, Lactobacillus, Alistipes, and Turicibacter are groups of bacteria that seemed to protect the mice from getting the illness. While other bacteria groups increased the likely hood of the mouse getting it, such as Escherichia or Streptococcus bacteria.

This information could be very helpful while treating and even preventing C. diff. If given access to these antibiotics, doctors could diagnose the patient based on whichever bacteria they are lacking. We can prevent C. diff if we can drastically decrease our susceptibility to it, which can be possible in future. And we could also try not prescribe mediations that we know are harmful in terms of causing C. diff. This information could really help many people that need to take antibiotics and also people who already have C. diff.

Some other links to check out: