Just a few days ago, a new species of British Ichthyosaur was identified from a complete set of skeletal remains.  After years of of being on display at the University of Bristol’s School of Earth Sciences in Bristol, England, the fossil remains were finally studied in an advanced research project. The six year long research project was led by the University of Manchester and geared to identify the large British Ichthyosaurs skeletal structure as a new species because of sudden differences in the bone structure. The group was able to solidify the differences and announced this specimen as a new species.   The group examined the differences in the endoskeleton skull and the fins in the species.

Honorary Scientist, Dean Lomax, and Professor Judy Massare, from a college in New York led this study.  Lomax said: “It’s quite amazing – hundreds of people must walk past this skeleton every day, yet its secrets have only just been uncovered.”  The two scientists named the new species Ichthyosaurs Larkini after a paleontologist Nigel Larkin.  Incidentally, Larkin literally translates to ‘fierce’, a word used to describe the habits of the dinosaur. 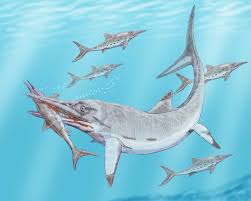 The reptile lived nearly 195 million years ago in the early Jurassic Period and was an ocean dwelling specimen. Research shows that Britain was a small chain of islands at that point in time.  Today it would most resemble dolphins and sharks.  The species could grow up to 15 meters long and were fierce predators and could move very quickly. 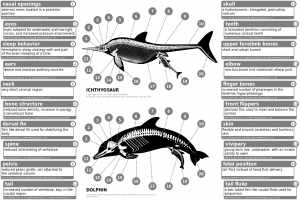 Examples of distinct features shared both by dolphins and derived ichthyopterygians

The specimen fossil was given the University of Bristol in the 1930’s by the City Museum.  It is the complete skeletal remains of a large Ichthyosaurs Larkini, referenced as ‘Specimen 25300’ before its identification.  The fossil of this species is now on display in the Wills Memorial Building, which is part of the University of Bristol School of Earth Sciences Collection.