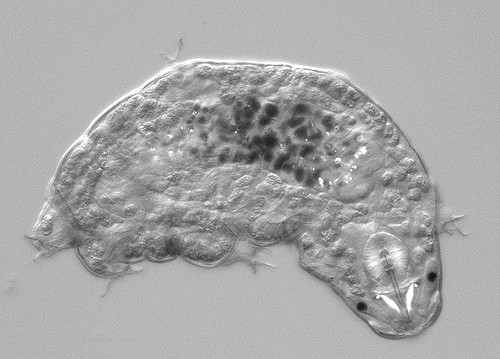 Tardigrades: the Superheroes of Biology

What is a Tardigrade?

Tardigrades are microscopic caterpillar-like creatures, sometimes called water bears, that are known to survive the extremes. Unfortunately, they look nothing like the Sea Bear from Spongebob, and a lot more like Rufus the Naked Mole Rat from Kim Possible. Tardigrades are biological superheroes, capable of withstanding near total dehydration and even space vacuums. Tardigrades do something called cryptobiosis– a state in which metabolic activities are slowed and proteins and sugars are synthesized to protect the organism’s cells. This makes it possible for Tardigrades to live in extreme environments where other life forms fail to survive, such as deserts and polar regions.

Why do we care?

Scientists recently discovered a new Tardigrade superpower: Resistance to X-Ray radiation. This survival skill is due to one of the proteins synthesized during cryptobiosis: Dsup. A molecular biologist from the University of Tokyo (Takekazu Kunieda) led an experiment in which cultures of human cells were manipulated to have similar qualities to Tardigrade cells. These new cells were able to reduce radiation damage by 40%.

These new findings open the doors for improving the resistance to radiation in humans. One day, it could be safe for people to withstand extreme radiation, temperatures, or dehydration just like the Tardigrade does. Who would have thought that such a tiny organism had the potential to solve so many problems?