What is happening to bees?

The media has been buzzing lately about bees! Pesticides and fungicides have long been thought to be problematic for our yellow, fuzzy, pollinator friends, but never more-so then now; 7 species of bees have been officially placed on the US Endangered Species List. In fact, a UN sponsored report revealed that over 40% of pollinator species such as bees and butterflies are facing extinction. This is an incredibly dangerous statistic, as 75% of the world’s food supply depends at least partly on pollination. 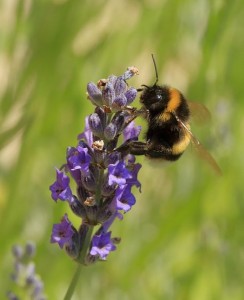 This rapid decline is forcing scientists to reexamine the use of pesticides on crops and bee colonies, and begin to think holistically. It’s a concept reminiscent of cancer research, calculating the “exposome,” or the net amount of pesticides an organism is exposed to over its lifetime.

When investigating the health of bees it is important to consider the colony as a single “super-organism” led by the queen bee, rather than individuals. On average, a queen bee will live for around two years, but lately queens haven’t been making it through a single season. Sometimes, the colony is able to replace her, but often they cannot. The loss of a queen can end in death for the entire colony.

Why is this happening?

After following almost a hundred colonies owned by three different beekeepers, for a full agricultural season, researchers from the University of Maryland found a total of 93 different pesticide compounds that came in contact with the bees. Some of these accumulated in wax, pollen and even the bodies of Nurse Bees. After further tests, they found between 5 and 20 different pesticide residues in every sample that exceeded the “hazard quotient”, or amount of a toxin an organism can handle. One surprising finding concerns fungicides, an alternative long thought to have been bee-friendly. In fact, these fungicides tended to have even more deadly effects on Queen Bees.

Ultimately, these findings, coupled with the rapid decline of bee population nationally shows us that we as humans are undeniably at least partly responsible for the decline of bee population. Bees are crucial to our way of life, and we should do everything we can to protect them. By supporting sustainable agriculture practices, and farms that use alternative forms of pest and fungus control, you too can do your part to save the bees.

Tardigrades: the Superheroes of Biology