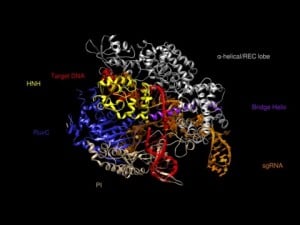 Arguably the greatest thing to happen to genetics since the Human Genome Project, Crispr-Cas 9 has been getting a lot of attention.  The Los Angeles Times wrote an article approximately 4 months ago discussing the ins and outs of the new gene editing breakthrough.  The concept of editing genes is nothing new for scientists.  They’ve been doing it since the 1970s.  So many people are asking “What makes Crispr so special?”  The answer is convenience.  Crispr-Cas 9, although still filled with flaws, is the easiest gene editing tool to use out there right now.  Scientists from UC Irvine and UC San Diego have used it on mosquitoes to fight malaria and scientists have begun to use it on human embryos as well.  Crispr is an acronym for Clustered Regularly Interspaced Short Palindromic Repeats which is a relatively complicated way of saying “gene editing tool.”  What Crispr does is it can target certain parts of a strand of DNA and “delete” them from the strand.  In reality they aren’t being “deleted” but “turned off” so RNA doesn’t code it and begin to manufacture proteins for it.  But the real question is why certain people are against gene editing.  Everyone’s seen the movie GATTACA where gene editing is not only commonplace, but discriminatory.  However in today’s world, the fear is much more strongly rooted than a fear of “geneticism” (genetic rascism).  Using Crispr on viable human embryos to edit genes may have undesired effects.  The turning off/on of one gene could result in the unintentional turning on/off of another.  Also, many scientists believe that a parent making decisions for an unborn child can be unethical and unfair if the child did not want those changes to be made.  And who knows, maybe in the future with the continuous use of Crispr and the development of more complex gene editing tools, “geneticism” could be a reality.

Other articles pertaining to Crispr are linked here and here for more information on the subject.