Stem Cells…Key to Youth and Controversy

Have you ever wondered what it would be like to be young forever? With the help of stem cells, this is possible. Stem cells can regenerate skin tissues and can also be used to treat diseases. However, something as enticing as living forever has its controversies. There are two types of stem cells: embryonic (ES) and adult (iPS); the embryonic stem cells are the controversial type. 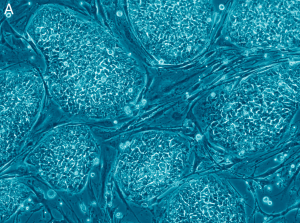 The only way to effectively use the embryonic stem cell is to kill a four to six day old embryo. Some people view this act as killing a baby, which sparks ethical arguments about whether or not to utilize embryonic stem cells. To avoid this controversy, scientists have been trying to use stem cells from iPS cells instead of ES cells, but they questioned the power of iPS cells compared to the ES ones.

Because genes may differ in the iPS cells from the its source, the ES cells, there is a possibility that these two cells do not have the same capability. One scientist notes that the source of iPS and ES cells differ, which can lead to differences in gene activity. The ES cells are derived from embryos, which are not completely identical to iPS adult cells.  However, recent scientific research shows that these two types of stem cells have more equal capabilities than scientists’ initially thought.

Even though these two experimental cells genetically matched, the two cells were not identical. The experiment showed 49 genes that differed between the two stem cells. Because of this difference, scientists needed to see if this affected the functional capability of the cells. The researchers conducted another experiment that analyzed 2 of the 49 genes. One helps take in glucose, while the other helps break it down. Even though these two genes were more active in the ES cell than the iPS cell, they were equally efficient at their respective jobs. The scientists concluded that these two specific cells were functionally equivalent.

The many experiments that have been conducted on the topic of stem cells contribute to the increase in research for more ways to utilize stem cells, without the ethical controversy. Scientists are starting to employ different technological devices, such as 3-D printers to help develop and build stem cells. This ability to fabricate cells using technology overcomes previous obstacles of limited stem cell resources.

The solution to hearing loss: listening to things?

ANOTHER new study on Coffee