According to a recent article, oncological research has been a recent area of vast development. Cancer is a widespread form of disease that affects different areas uniquely and operates very subjectively. On a basic level, cancer is the uncontrolled growth and division of a cell.  This often yields a malignant tumor which can metastasize to other areas of the body.  When a tumor metastasizes and spreads beyond the primary site to other organs of the body, the cancer is considered to be Stage IV.  This is the most aggressive stage of cancer development and is often the most difficult to treat.  The new treatment revealed by Cornell University Engineers seeks to inhibit a tumor’s ability to metastasize. 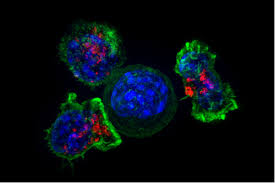 The paper explained the new approach in “annihilating” the tumors before they progress to a metastatic stage.  The key to this is not actually killing the cell, rather, inducing apoptosis of the cancerous cell.  Without the jargon, it means that the new treatment will not explicitly kill the cell, instead it will cause the cell to kill itself. The engineers accomplished this in model organism trials using mice.  The procedure involves injecting specialized liposomes in the lymph nodes, which commonly play a key role in metastasis.  The lymph nodes are parts of the lymphatic system where lymphocytes are formed. Lymphocytes are known as “killer cells” because they are a form of leukocytes (white blood cells).  The injection contains liposomes (membranous sacs of water) with a special “Tumor necrosis factor Related Apoptosis-Inducing Ligand” protein.  These will attach to the lymphocytes and target the cancerous cells, and effectively eliminate the tumor before it metastasizes.

The paper also references previous work by the engineering group where they created a similar approach for eliminating bloodstream metastases in January 2014.  This coupled with a lymphatic treatment can greatly reduce the rate of metastasis in patients with aggressive malignant tumors.  Recent developments in oncological treatments have suggested promising developments in the way of cancer treatments–and cures.

The solution to hearing loss: listening to things?