A new study of the genomes and epigenomes of mice and humans is beginning to link the two, especially in regards to obesity.

As Andrew Feinberg, MD states, “It’s well known that most common diseases like diabetes result from a combination of genetic and environmental risk factors. What we haven’t been able to do is figure out how, exactly, the two are connected,”. Therefore, Feinberg began to study epigenetic tags to further understand gene usage.

His project with his team was to study the epigenetics of identical mice that were fed either normal or high-calorie diets. He found that the difference between normal and obese mice was the presence of chemical tags, or methyl groups, that prevent the production of proteins. This is significant because as we have learned, these types of modifications of DNA can be copied and inherited, which is then passed on into the next generation. This revealed that the normal and obese mice did not have the same location sites of their tags, giving them that alteration in their DNA. This is often seen in the alterations of the Agouti gene in mice. 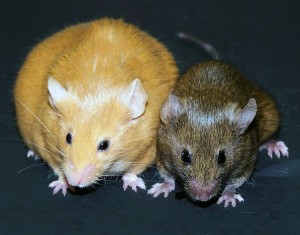 This proves that epigenetic changes are related to the environment and food sources that are around us, creating patterns based on one’s diet (which can create risk if a high-calorie intake is continuous).They also found that epigenetic changes affect genes that are already both linked to diabetes as well as those who aren’t, allowing them to further conclude that genes plays more of a role in diabetes than we previously thought.

This allows hope for future to provide epigenetic tests, which can prevent diabetes in those who are on track to have it later in life.