The Continued Spread of Ebola 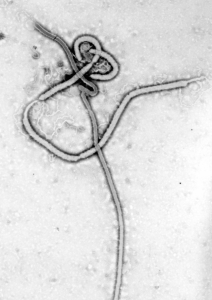 The most recent epidemic that is spreading through Africa is Ebola. It has taken the lives of over a thousand people, but it could get much worse. Without proper isolation and treatment of the infection scientists predict the number of infected individuals could increase to more than 20,000 in just six weeks. Some scientists are even predicting more than a million deaths due to Ebola if  treatment and containment is not improved. Ebola is generally transmitted from animals to humans, who then pass the virus t each other by contact. Symptoms generally include fever, fatigue, muscle pain, headaches and a sore throat, which is then followed by vomiting, diarrhoea, rash, and finally impaired kidney and liver function. The fatality rage for this contagion is about 70%. As of right now there is no vaccine for this virus, and the best way to stop the spread of it is to simply isolate those experiencing symptoms. This virus is currently being closely monitored as it is unknown whether the situation in Africa will get worse, and begin to spread to other countries, infecting people by the thousands. Hopefully scientists are able to discover a vaccine that will halt the spread of this deadly virus, saving the lives of thousands of individuals