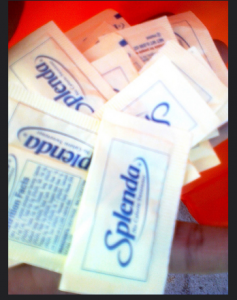 Have you ever drunk a zero-calorie soda or eaten a sugar free dessert as a “healthier” choice or perhaps to even “cut calories”? If you’re like me, you have probably begrudgingly done this numerous times, maybe even at the request of your mom, despite your desire for that sweet snack. Well, new research has been conducted that suggests that the artificial sweeteners used to substitute sugar actually increase blood sugar levels-the exact condition they aim to avoid.

A study conducted by biologists, Segal and Elinav, of the Weizmann Institute of Science in Israel, showed that after 11 weeks of drinking water with the sweetener Saccharin, commonly found in Sweet’N Low, mice had higher glucose levels in their bloodstream, a symptom of diabetes. Additionally, the scientists conducted another experiment with seven volunteers who were given the maximum approved daily dose of saccharin for a week. This time Segal and Elinav found that four out of the seven subjects developed an unbalanced glucose metabolism similar to that of the mice. From this experiment, the scientists hypothesized that artificial sweeteners negatively affect our bodies and may promote disease.

Although these results are preliminary and are largely reflective of mice’s digestive systems rather than humans, the study raises a valuable caution for consumers to reassess their actions. As the science community continues to explore this study, are you going to continue consuming foods with artificial sweeteners.

For more information about the dangers of artificial sweeteners, please check out: http://well.blogs.nytimes.com/2014/09/17/artificial-sweeteners-may-disrupt-bodys-blood-sugar-controls/?_php=true&_type=blogs&_r=0