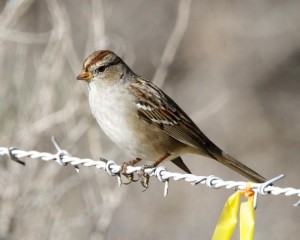 In a recent paper written by leading author Tracy Larson and co-authors Nivretta Thatra and Brian Lee, they discovered a brain pathway that replaces brain cells lost naturally. This study could further the progress of using replacement cells for the neurons lost during aging, Alzheimer’s Disease, and other natural causes.

These scientists used songbirds, specifically Gambel’s white-crowned sparrows, as a model and observed that the area of their brain that controls song increases during breeding season, and decreases during other times in the year. After breeding season the cells in the area of the bird’s brain that controls songs undergoes programmed cell death. What is noteworthy about these dying cells is that they are also releasing a signal that reaches certain stem cells in the brain that will eventually redevelop the singing part of the brain by the time the next breeding season arrives. This process of developing new neurons from stem cells called neurogenesis normally occurs in the form of “regenerative” neurogenesis post brain trauma in mammals; however, it also occurs in the hippocampus in small amounts.

These songbirds could provide insight on how the human brain can perform natural neurogenesis and help replace neurons lost because of aging and neurodegenerative diseases. These finding may pave the way to alternative treatment for repairing human brains using neurogenesis and replacement cells.

The Smell of Grass: A Cry for Help