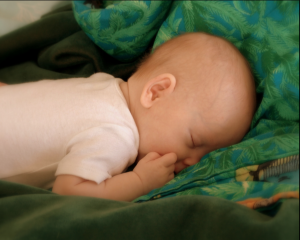 If you’re like me, and most of you are since you’re all human, you’ve probably had a night or two where you just couldn’t fall asleep and figured that you had too much going on in your brain.  Maybe, if you’ve taken a biology course at some point or another, you’ve thought that your brain just has too much activity going on and you wished it would all just come to a nice rest.  In reality, if you’re experiencing that little bit of restlessness, your brain isn’t doing enough!  Scientists at Oxford University’s Centre for Neural Circuits and Behavior recently carried out a study on fruit flies in which they determined the “sleep switch” is really just a regulation of certain neurons in the brain which become more active when the body needs sleep.  Although the study was done on an entirely different species, these scientists still believe that the mechanism is comparable in humans due to the presence of similar neurons in the human brain.  The study showed that when sleep is needed by the body, the “electrical excitability” of the neurons increases, leading to the conclusion that their activity is related to how sleep is triggered.

While this recent discovery has already been inspiring new ideas on how to combat sleep disorders, it is really a step towards the much more basic question, “Why do we (animals) need to sleep?”  The next step towards answering this questions, explains Dr. Diogo Pimentel of Oxford University, is to identify “what happens in the brain during waking that requires sleep to reset.”

This “sleep switch” mechanism is one of two that are theorized to be used in the process of sleep.  The other being the body’s internal clock, which adjusts an animal to certain cycles based on the 24 hour day.  At the point of sleepiness, “The body clock says it’s the right time, and the sleep switch has built up pressure during a long waking day,” explains Professor Miesenböck, in whose laboratory the study was conducted.

Marriage: GOOD for your Blood Pressure?