Currently, we are in the midst of National Eating Disorders Awareness Week.  Eating disorders are a rising problem in the United States.  About 30 million men and women suffer from an eating disorder in their lifetimes, including Anorexia Nervosa, Bulimia Nervosa, Binge Eating Disorder, and EDNOS.  Although treatment options are improving, it is quite difficult to recover from an eating disorder, which I now as someone currently in recovery from Anorexia Nervosa, and many people stay ensconced in the disorder for years.  Luckily, a new therapy has been found to be useful in the treatment of chronic eating disorders.  This new treatment method is called cognitive remediation therapy (CRT).  People in the depth of an eating disorder often show a deficit in neuropsychological functioning, which might be a reason for the development of an eating disorder and also could be the reason for a relapse.  Deficits in cognitive flexibility, for example set-shifting and central coherence, seem to perpetuate the symptoms of an eating disorder.  In CRT, patients focus on how they think rather than the exact thoughts that they are thinking.  In a study, patients who received CRT in addition to traditional treatment showed a much more favorable outcome in terms of recovery.  Patients who participated in CRT were able to improve their cognitive flexibility and keep in mind two ideas at once.  An example of this would be having the belief that a certain food will immediately cause one to gain ten pounds but also keeping in mind that that is a disordered thought and that no food itself (in moderation) will ever make anyone fat.  The ability to entertain both of these thoughts would allow the patient to think more rationally and recognize the disordered side of his or her thinking.  I never had the opportunity to experience CRT, but I’m sure it would have been helpful in allowing me to more clearly distinguish the eating disorder thoughts from the rational thoughts.  Hopefully, CRT will be useful in bringing the 20% mortality rate of eating disorders down. 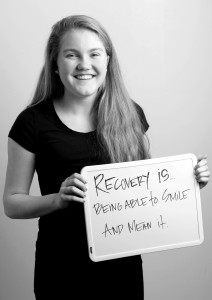 Photo by Project Heal (and Mary)

Mingming and Ningning did it!

Weird ways a child can get hurt