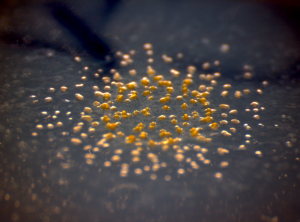 The Myxococcus xanthus is a bacterium found in soil that scientist identify as a “social” bacteria. Organized into multi-cellular and three-dimensional structures made of thousands of cells, the bacterium works together by hunting for food and surviving under difficult conditions. They form interesting structures and help each other survive, which are fascinating points of study for scientists who have been researching E. Coli (which has medical significance and influence) in test tubes. However scientists believe that this behavior in test tubes is obviously not as revealing as bacteria behavior in a social or spacial structure that they find in Myxococcus xanthus.

Myxococcus xanthus eats other microbes and is therefore classified as “predatory”. The structural complex that the thousands of cells form interests scientists, because it is self-made and because it can hunt, kill, and digest various different microbes. By identifying the mechanisms that help the bacteria achieve their multi-cellular behaviors, scientists believe that this will answer questions about how individual cells break their symmetry to organize into these complicated many-celled compositions, teaching scientists about the evolution of multi-cellularity. “The most primitive form of life is single-cell life,” Igoshin, a scientific investigator, says. “The next step up would be going from single cells to multicellular organisms. These bacteria are somewhat in the middle.”

The bacterium is capable of adopting various forms (ripples, segments, fruiting bodies) in order to hunt for food successfully as a unit and live for a long time together. These capabilities give researchers insight into designing future antibiotics by understanding its functions and methods, especially in embryonic development and other manifestations of this kind.

From Fin to Foot