In recent studies, it is said that people diagnosed with type 2 diabetes may also show signs of the beginnings  of Alzheimer’s. As we studied in our last unit, type 2 diabetes develops in a person who has taken in a lot of glucose in their lifetime. So much glucose that after a while–receptors begin to not recognize insulin. Eating too much sugary, high-fat foods, is extremely detrimental to ones health. Common side affects of diabetes include: heart disease, nerve damage, vision loss, kidney damage, and foot damage. According to my article, not only can insulin resistance cause type 2 diabetes, but also can lead to memory loss and cognitive issues. In a study done at Brown University, it was found that not only can you’re liver and fat cells become diabetic but even you’re brain can become diabetic! The hippocampus, as our class is familiar with, deals with learning and memory. When insulin is resisted in the hippocampus, cognitive problems can occur. One of the main causes of Alzheimer’s is the mass build up of the protein beta-amyloid, in the brain. This build up leaves insoluble plaques between dead cells in the brain.

An investigation was conducted to find out if beta-amyloid buildup may be a cause of cognitive decline in type 2 diabetes. 20 rats were given a high-fat diet that led to type 2 diabetes and another group of 20 rats were given a healthy diet. Both groups of rats were trained to expect a shock while in a dark cage. When rats returned to their dark cages, scientists would measure how long it took for the rats to react to the shock. Of course, the rats with type 2 diabetes proved weaker. They stood still in their dark cages twice as long as the healthy rats did.

Diabetes and Alzheimer’s epidemic is only becoming more and more relevant as the years go by. This study is important. Although preventing diabetes may not prevent types of dementia, it will prevent many other serious health problems. Because of recent findings of links between the two diseases, scientists are doing everything possible  to prevent Alzheimer’s in patients with type 2 diabetes. 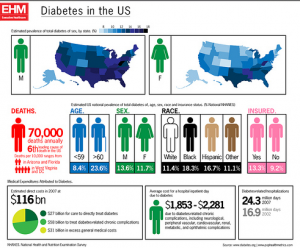