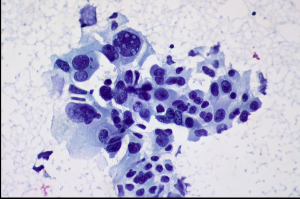 A metastasized tumor is a group of cancer cells that have spread from a localized area through out the body. Normally once a cancer has metastasized the patient has a more serious prognosis. In some cancers, metastatic disease can be a death sentence. For years scientists have been challenged with understanding how tumors spread beyond their initial boundaries.

Their questions may have finally been answered. Researchers at Yale University have found metastasis in the brain of a cancer patient with melanoma that is a hybrid of Tumor and White Blood Cells. It is hypothesized that these hybrids may explain how cancers travel to distant sites and metastasize. This theory had been proposed before, but it was not until recently that genes from both tumor and White Blood cells were found in tumor cells. Researchers tested their theory on a sixty-eight year old cancer patient who had received a bone marrow transplant from his brother. Bone marrow helps stimulate the production of white blood cells. No one person’s bone marrow is exactly alike, even if they are brothers. Researchers found that the bone marrow the patient had received from his brother fused with the cancer cells to make a hybrid cell almost identical to that of the patient. This implies that the cancer cells are not just targeting the specific, weak white blood cells of the cancer patient, but also the healthier blood cells of his brother. Cancer can metastasize quicker than we had assumed.

So it leaves us with the question: What are we to do with this information? Researchers suggest that when the mechanism of fusion is fully understood, target therapies can be developed to attack the formation of the White Cell- tumor Hybrids.