Scientists at Stanford University made an entire mouse brain and part of a human brain that is the same consistency as Jell-O. The brain model is transparent so that neurons sending and receiving information can be highlighted and in in the same complexity as 3-D, but without having to slice the model. This new process, called Clarity, preserves the biochemistry of the brain so well researchers can reuse the same model over and over again.

The Clarity technique also works with brains that have been preserved for years. 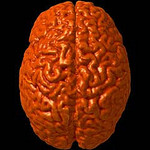 Imagine if you could see through this brain!

There are many was to make a tissue transparent. Clarity uses hydrogel, a substance of water held together by other molecules to give it solidity. The hydrogel forms a mesh that permeates the brain and connects to most molecules other than lipids. The hydrogel brain is then put in a soapy electrical solution, where a current is applied, driving the solution to the brain and getting rid of the lipids. The brain is then transparent with its biochemistry still in tact, so it can be infused with chemicals that will show the details of its structure.

The hardest part of the procedure is obtaining the correct ratio of temperature, electricity and solution. More work is needed to be done before this method can be applied to an entire human brain.

The Clarity technique gives scientists a more exact image of what’s going on in people’s brains. This process may discover physical reasons for debilitating mental disorders, such as PTDS, schizophrenia, and autism.

Can we fix the expensive problem of obesity??

Why do you enjoy music?