The enzyme “Cholesterol-25-Hydroxylase,” or CH25H, might help fight against human viruses such as Rift Valley Fever, Niphah and HIV. CH25H converts cholesterol to an oxysterol called 25HC, which can permeate a cell’s wall to prevent a virus from getting in. The CH25H enzyme is activated by interferon, an anti-viral cell signaling protein produced in the body.  Researchers have known that interferon has been part of the body’s defense mechanism against viruses, though it does not have any antiviral properties itself.

This discovery is revolutionary because other antiviral genes have not been able to be used for treatment of viruses in humans. According to Yang Lui, a student at the David Geffen School of Medicine at UCLA, most antiviral genes are difficult to use in therapy because the genes are difficult for cells to express. However, CH25H is different because it is naturally synthesized. 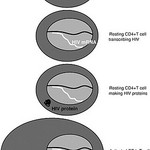 HIV Replication within a cell

The discovery of CH25H is relevant to the efforts to develop broad antivirals against an increase of emerging pathogens. In a collaboration with Dr. Lee, another UCLA professor, it was discovered that the 25HC produced from CH25H can inhibit HIV growth in vivo. The researchers initially found that 25HC inhibited HIV growth in cultures. When implanted mice with human tissues, the 25HC reduced the HIV in within 7 days and reversed T-Cell depletion caused by the HIV. It was also discovered that 25HC inhibited the growth of other diseases such as Rift Valley Fever Virus and Ebola.

There are still some weaknesses with the study. It’s difficult to deliver 25HC in the large doses needed to fight viruses. Researchers also need to compare 25HC to other antiviral HIV treatments.