Yes, you read the title correctly: Oxygen can be dangerous.

As you may (or may not) remember, Oxygen is needed for two parts of cellular respiration. 1) For the Pyruvate made in Glycolysis to enter the mitochondria for the Krebs Cycle 2) As the final electron acceptor in the electron transport chain during Chemiosmosis. If there isn’t enough oxygen around (say, you’re running and there’s not enough oxygen to go to your muscle cells), the pyruvate made in glycolysis will not enter the mitochondria, but will instead undergo fermentation, which basically turns the NADH back into NAD+ so cycle of cellular respiration can continue.

Oxygen becomes dangerous when unhealthy cells fail to undergo cellular respiration, despite plentiful oxygen and instead undergo fermentation. This leads to uncontrollable cell growth: cancer. Luckily, scientists just discovered the enzyme superoxide dimutase, or SOD1 for short, regulates cell energy and metabolism by  transmitting signals from oxygen to glucose to repress respiration. This happens through cell signaling, when SOD1 protects the enzyme Kinase-1 gamma, of CK1Y, an important key from switching from respiration to fermentation. The results of this study were published in the Journal “Cell” on January 17th. 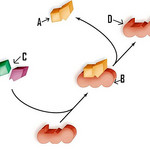 This diagram shows how enzymes, like SOD1, work. The substrate binds to the active site of the enzyme and the enzyme either breaks the substrate in two or puts two substrates together.

The interesting thing about this study is that SOD1 is not a new discovery. Scientists have known about SOD1 since 1969, but they thought it only protected against free radicals. Researcher Valeria C. Culotta calls SOD cells “superheroes” because of their many powers: protecting against free radicles and regulating cellular respiration.

According to Vernon Anderson, PhD, the result of this study might find out why cells turn to fermentation, casing cancer and some other diseases.