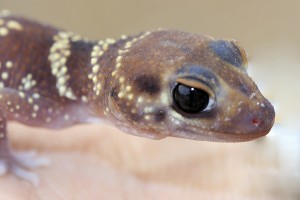 Have you ever wished you could walk on walls? Ever wished you could get your new plasma TV on the wall and be able to easily move it later? Well, now you can do both of those things. Using the gecko‘s feet as a model, scientists were able to replicate the adhesive mechanism that geckos use to get around.

The gecko’s feet can stick to almost any smooth surface whether it be vertical, horizontal, slanted, or curved. In addition, they never leave any sticky residue behind and never have trouble moving. The ability to put things, particularly heavy things, on walls and easily remove them later without any damage is something that everyone would like to be able to do. Scientists researched the intricate mechanisms in the geckos feet to determine how the gecko can firmly stick to smooth surfaces and move so easily. They determined that it was a combination of the pads on the gecko’s feet along with the arrangement of tendons and muscles in the feet. This new idea allowed scientists to develop an adhesive, “Geckskin”, that could stick to a smooth surface, hold 700 pounds, and be easily removed. This new adhesive is still being perfected but soon you could actually be able to walk on walls, just like the gecko.