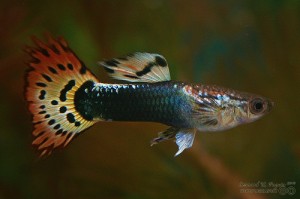 Guppies (those small, colorful freshwater fish that everyone loves to keep in their fish tanks) have been evolving in the wild for more than 500,000 years, yet one feature has remained constant over all that time. Research conducted by UCLA Biologists has shown that the orange spot found on the wild male guppy has remained not simply the same color, but the same hue of orange since near the beginning of this fish’s existence. The reason for all this effort? That particular shade of orange is the one that female guppies prefer. What is so fascinating about this to biologists is that it proves that evolution is not simply an organisms adaptations to be better suited to its environment.

As the type and availability of food for male guppies has varied as a result of both time and location (guppies are native to both trinidad and venezuela) they have evolved to match the levels of carotenoids and drosopterins to produce that orange that the females are so attracted to, even if it comes at a high energy cost, or the spot must be more dull to produce the correct shade.

Although we all understand that reproduction is the ultimate goal of all organisms, what these guppies have done over the past half a million years is still not evolution in the way that many of us think about it. What has happened with a great many organisms is that they adapt in ways that make it more easy for them to survive and then these traits become attractive to the opposite sex because their presence indicates that that individual will produce offspring that will also be better suited for its environment. Here, however, male guppies have striven to remain attractive to their mates even when this comes at a high energy cost for many. As a result, the females have not had to change their taste in mates, and the males have been forced to continue playing to their preferences, or risk not reproducing.

Can you think of any other organisms that have adapted to be attractive to mates even when it made them less suited for their environment?