Hartley 2, The Stork of Earth’s Water

You may remember what you were told about how water came to be on earth when you were younger. 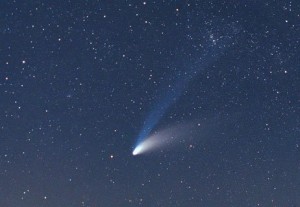 Perhaps your siblings suggested that you cried so much you made the Atlantic. Perhaps that strange man your parents don’t like confided in you that water is merely a government conspiracy. Perhaps your elementary teachers assured you that you would learn about it when you were older. Well, the answer (or part of it, at least) is here. And the answer is: Comet Water.

A recent finding by researchers suggests that part of the world’s water supply may have been delivered by comets. To this day, only six comets have ever been detected with water on its surface. This new comet, named Hartley 2, was found with ice by scientists using the Herschel Space Telescope. What makes Hartley 2’s ice so profound compared to the other comets with water, has to do with their molecular composition. The other comets’ water had a ratio of deuterium to hydrogen that did not match up with the molecular composition of earth’s water. This suggests that those comets were not the source of earth’s water. Scientists believe that the ratio of these other comets did not match because they came from something called the Oort cloud. Hartley 2, is believed to have come from the Kuiper Belt which is “1,000 times closer to earth [than the Oort cloud]” This closeness seems to be the reason that Hartley 2’s ice is a molecular match for the water on earth.

With this finding, other comets can be compared to Hartley 2’s composition and determined as a match. However, with this exciting new finding also comes the promise of much more work in the future. Paul Hartogh, who works for the Max Planck Institute for Solar System Research in Germany, hints that: “This finding means that models of the formation of the solar system may have to be revisited.”

Don’t Blame Me, Blame the Involuntary Remodeling of My Brain!

The Science Behind Dreaming